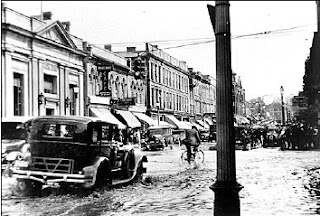 This area had a significant winter snowfall after a very wet autumn that left the ground saturated with water. Warmer temperatures in the past week started a rapid thaw and flood warnings were issued for some of the tributaries in the water shed. Flooding of the Grand River is nothing new and smaller floods, such as the one shown above in the 1930's, barely caused alarm. There have been some serious floods, one within my lifetime.

On May 18, 1974, I left McMaster University in Hamilton, Ontario by bus to come home for the weekend. As we approached the town of Galt, Ontario, we were forced to return to Hamilton because of a flash flood. The downtown area was covered in four feet of water as this poor quality, but locally famous newspaper photograph shows. The policeman, John Shuttleworth, was quite a celebrity for his attention to his post.
Large areas of the watershed were flooded and I recall my future father-in-law, along with others, launching boats in the floodwaters.
After this major flood, another dam was built upstream near Guelph to control the flow of the Grand and Speed Rivers. Other local rivers do not have flood control systems in place and last week there was minor flooding in some smaller towns. 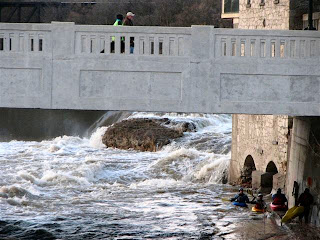 I went to downtown Galt last Thursday to see the area affected by the 1974 flood. The water was high and flowing quickly. Temporary flood walls had been readied near the bridges. There were four men in kayaks preparing to paddle in the white, cold water. The air temperature was below freezing and chunks of ice floated in the water. (I have more photos of these adventurous men on my Flickr site.) Becka and I watched them for about ten minutes before we were so cold that we headed home for a pot of hot tea.

Many communities have been built along this river. This stone amphitheatre is built in the ruins of an old mill. Building on a floodplain gave access to water power and transportation, but floods were a certainty with the spring thaw. Today, with a number of dams upstream, another major flood is less likely to occur. The building of dams can be controversial but they have become a necessity due to urban growth along the watershed. 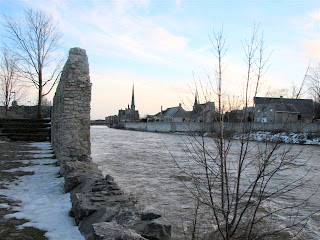 The power of water is awesome and floods, hurricanes, tsunamis, and rain will continue to leave their mark in spite of man's best preparations. The cold temperatures of the past few days have slowed the thaw and the flood risk has decreased significantly for now.

I love walking along this river, but will always choose to live above the flood plain.
Posted by Ruth at 9:02 pm