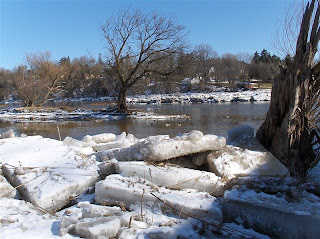 Sometime at the end of last week, the ice on the river near the hospital broke up. Some sections of the river did not freeze much this winter, but this area was solidly frozen for several weeks. One week ago I walked the trail and noticed that the ice in the centre of the river had given way to the current and the thaw had started.
I took these pictures on March 20th and wonder at the force that would move the large chunks of ice off the river and up to 30 metres away from the banks. The trail, pictured above, was completely impassable. The picture below was taken on the opposite bank and I was able to get around this pile of ice with great care. The hospital is on the hill in the background. 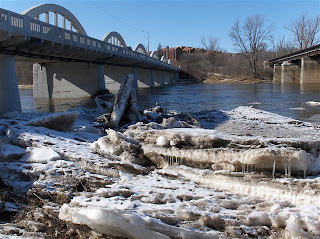 Many geese and ducks were in the water and near the trails. The Canada geese were exceptionally noisy and aggressive and challenged me with hisses as I passed beside them. Many pairs of ducks were together on the water and it was obvious that mating season has arrived. There were six Common Merganser couples together paddling downstream and occasionally diving under the water for food. I think these ducks are very elegant, the male in his tuxedo colours and the female with her flamboyant reddish hairdo. 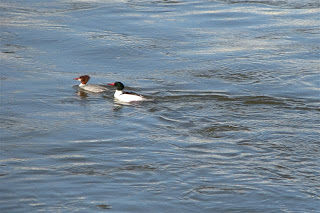 This pair looked ready for a party. (click photo to enlarge)
I walked towards a cattail swamp and heard the song of the Red-winged blackbird echoing back and forth between two stands of trees. I have been listening to the CD included in the book Music of the Birds and was pleased that I recognized the distinctive buzzing call.

A brief diversion here....our dog ignores the sounds of music and television in the house. However, when I play the bird songs on CD, he is completely attentive, ears twitching and his mind obviously responsive to the various sounds coming from the speakers.

After tramping into the muddy marsh, I was able to see one Red-winged blackbird high in a treetop. This male was calling loudly and other birds were responding in turn to his message. I have included a sample of his call from the CD below the picture. We don't have large numbers of migratory birds here yet, but they are returning in spite of the ice and snow that remains on the ground.
If they have reason to sing, then so do I. 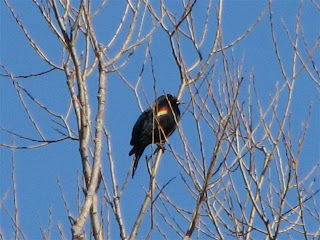