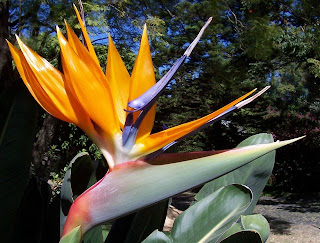 Mom took this picture in her Guadalajara garden
I spent last evening cleaning up my flower beds and found plenty of new growth just poking up through the soil. I may have some bulbs in flower by next week but for this week's Friday flowers, I am featuring a tropical plant once again. Mom and Dad are visiting and have been sharing some of their stories and digital pictures of birds and flowers in their area of Mexico.

The Strelitzia, commonly known as the bird of paradise flower, is a perennial plant native to South Africa. I remember them in our garden there and they have always been a favourite of mine. Mom grew them in her garden in Guadalajara, Mexico and they are found in many tropical and subtropical locations. They are also known as the crane lily and are of the same family as the banana. The bird of paradise grows to about four feet in height and is trunkless with thick, waxy green leaves that resemble a banana leaf. 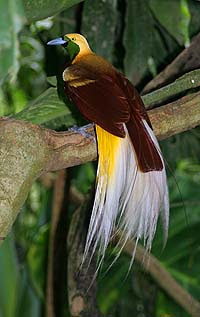 The flower is named for its resemblance to the bird of paradise, a bird found in areas of Australasia. (photo from Wikipedia). You can decide if there is a similarity between the bird and the flower. 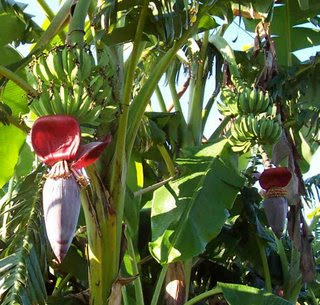 My brother has a banana grove on his property and my mother took this picture of his banana flowers. You can see the green bananas developing above the petals. A banana stalk dies after it produces fruit but new shoots develop from the root system beside the dead stalks. (My raspberry canes produce in the same way.) There are similarities in the foliage and flower, but the bird of paradise is strictly ornamental.
I will admire the flower of the Strelitzia, but the banana will always be one of my favourite foods.
Posted by Ruth at 6:30 am