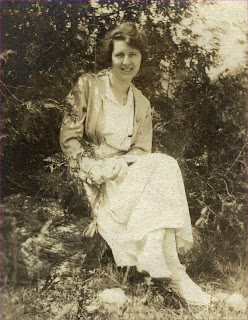 I have written about my maternal grandmother several times and have mentioned that she was one of the most influential people in my life. She was born on May 10, 1896 in Toronto, Ontario when the nation of Canada was just 29 years old. Her generation experienced astounding changes in science, world politics and culture.
Her father was a civil servant and worked at the provincial parliament buildings in Toronto. He decided that she would attend the University of Toronto and become a doctor. She met her husband at medical school and after they graduated, they moved to a small town north of Toronto and had a largely rural medical practice.
Life wasn't always easy. Their first home burned to the ground, and their first born son died at the age of three of meningitis. During the depression, payment for medical services was impossible for many people.
Grandma was a very sociable person and was active in the town's affairs. As a married woman and mother, she did not have her own medical practice for many years. Grandad bought a large piece of sandy land 5 miles outside of town and planted many pine trees as well as an apple orchard. A small log cabin provided shelter for day trips to the farm and was the setting for many picnics and family gatherings. 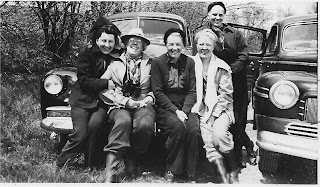 Bird club at the farm. Grandma is on the left.

Grandma was an enthusiastic birder and organized a bird club with some of the ladies from town. She was also an avid gardener and had a large flower border as well as a vegetable garden. I have a number of perennials that I divided from her garden over the years.
Grandma was widowed in her early fifties. She had not been working as a doctor for some time so she did some retraining at the Hospital for Sick Children in Toronto in the late 1940's. She had a busy paediatric practice in the town until she retired.
After retirement she travelled widely and made many friends around the world. She remained an active volunteer in her church and community. She lived simply and graciously. She bought items of good quality and they lasted a lifetime. As long as I can remember, she had the same furniture, rugs and curtains. She invested her time and money in other people and helped many along the way. 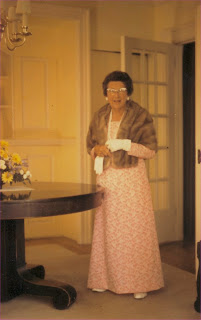 She was 78 years old in this picture and never coloured her hair. I was married the following year and took several trips with her when she was in her 80's. As she became older and more frail, she never complained about her aches and pains. She was always interested in others and loved each of her new great grandchildren as they came along.
We took our three young daughters to Mexico for Christmas in 1989 to visit my parents. She helped us pay for the tickets and was happy to hear of our adventures and see our pictures. Shortly afterwards she passed away following a three day illness, independent until the end.
She lives on in each of us who knew her and the lessons I learned from her are fresh and relevant today. I wish I had paid more attention to some of her family stories taking the time to write down a few details about ancestors I never knew. I know I was fortunate to have her as part of my life for a generous 35 years and hope I can keep her memory alive for those who did not know her.