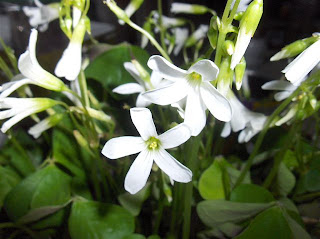 The Irish shamrock is any one of a number of trifoliate plants, those with leaves divided into three leaflets. The white clover (Trifolium repens), a wild flower which is commonly found in lawns, is the traditional favourite. I bought this wood sorrel (Oxalis regnelli) at a flower shop where it was sold as a St. Patrick's Day shamrock. The delicate white flowers bloom in the spring above the folded heart shaped leaves.

St. Patrick, the patron saint of Ireland lived from 385 to 461 AD. Born in Wales, he converted to Christianity and became a missionary to Ireland. According to Irish legend, St. Patrick chose the shamrock as a symbol of the church's Holy Trinity because of its three leaflets bound by a common stalk. In the 19th century it became a symbol of rebellion against the English and began to be strongly associated with Irish identity. 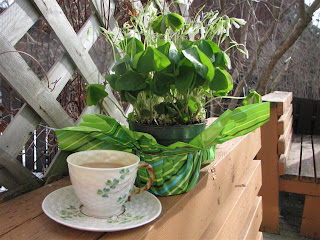 Today, St. Patrick's Day remains a Catholic holy day, but it has evolved into a secular holiday. In Canada, it is an official holiday in Newfoundland and Labrador. The city of Montreal, Quebec has hosted a parade each year since 1824. All over Europe and North America, it is a day to celebrate all things Irish.

May you always have...
Walls for the winds
A roof for the rains
Tea beside the fire
Laughter to cheer you
Those you love near you
And all your heart may desire. 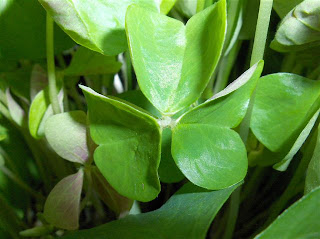 And a special Happy Birthday
to my sister-in-law, Pat,
who celebrates a milestone birthday tomorrow!
Posted by Ruth at 6:25 am