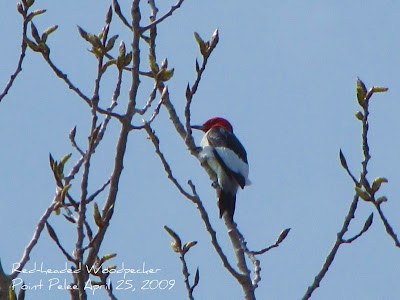 At the Point Pelee National Park visitors' centre, a number of items are available for purchase including bird checklist booklets for about $2.00. I grabbed one as we were about to leave and did not take it out of the bag until we were on the way home. The title read, "Liste d'oiseaux" and I quickly realized I had picked up the French version. My high school French was not adequate for reading bird names and I couldn't even guess what sittelles, troglodytes and roitoletes might be. There is even an alouette, the topic of a song we sang in school, but I cannot remember what it means. So my bird list for the weekend is scrawled in pencil on the paper bag from the store and I am not sure if it is complete.

Going through my pictures helped me identify some birds I was uncertain of in the field and these four were all new to me. The number one bird I wanted to see was a Red-headed Woodpecker and it was one of the first we saw at the point. It flew past and stayed in the top of a tree for at least ten minutes so I had lots of time to watch it through binoculars. It was smaller than I expected, but very beautiful with its distinctive red, white and black colouring. 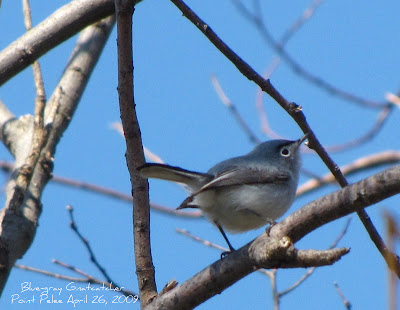 We heard people talking about the Blue-gray Gnatcatchers and saw several. They are not much larger than a Kinglet and are just as active. I waited quite a while to get this picture. Pelee birders are in one of two groups based on their primary gear;-a camera or a pair of binoculars. Those looking for good pictures must be very patient and wait for birds to come into the open. They are trying for a few good shots, not an extensive list. The other birders are out to see as many different birds as possible and they move about fairly quickly. I took a few pictures, but really enjoyed using my binoculars. 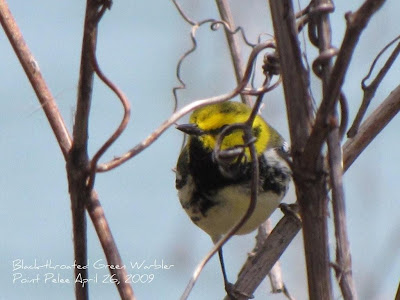 This Black-throated Green Warbler was very friendly, but I am not sure who named it as it was distinctly yellow. Other warblers we saw were Yellow, Yellow-rumped, Blackpoll, Pine and Palm Warblers. Experienced birders identified many more and I have added the list of birds reported at the park while we were there at the end of this post. 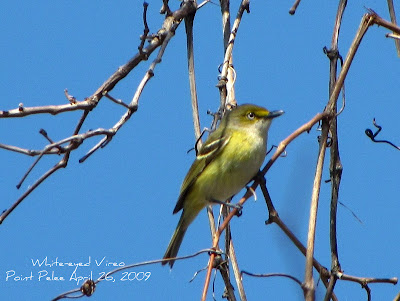 White-eyed Vireos were one of the easiest birds to find on the point and I was fortunate to get one clear photograph. Vireos and Thrushes were really the birds of the day.

Last evening, along a trail near home, I saw my first Ovenbird. We were walking along the river and a steep embankment was on one side. I detected some movement and saw this plain little bird in a nest under a thicket. It emerged and started singing and what a voice it had! So much of birding is knowing where to look and how to listen for the distinctive sound each bird makes. Standing on the tip of Point Pelee was like being in the centre of a great orchestra. Many different bird songs were audible and even if I had been unable to identify a single one, it was still a very enjoyable experience.
-----------------------------------------------------
Subject: Point Pelee Migration update - April 25,2009
From: Sarah.Rupert AT pc.gc.ca

Apr 25th- It's been another great day here at the Point, there are hundreds of new migrants in the park today and some great highlights. At the tip this morning, birders were treated to an easy to see Brewster's Warbler. As well, there was a Grasshopper Sparrow seen along the West side of the point and then later found along the West Beach footpath, approx 300 m north of the Tip shuttle loop. Blue-headed vireos are numerous in the park and White-eyed vireos have been reported from several locations. Red-headed Woodpecker was also noted at the Tip this morning, as well as Orchard and Baltimore Orioles. A Northern Parula was found at the Cemetery and a Scarlet Tanager was noted along seasonal birding footpath north of Pioneer. A Vesper Sparrow was found feeding on the newly seeded lawn in front of the washrooms at Pioneer as well. This afternoon, there was a lot of bird activity along the road between White Pine and Black Willow Beach - the bike trail along this section has afforded great looks at many species - Pine Warblers are numerous in the area and easy to find. A Henslow's Sparrow was just reported along the roadside (on the east side of the road, opposite the Black Willow beach entrance sign).
The Hooded Warbler spotted along the Woodland Nature Trail was found again this afternoon. Outside the park, 15 American Avocets were spotted by Dean Ware at the Hillman Marsh shorebird cell. There are many different species of duck present there as well, viewing is often best at the end of the day.

We've enjoyed another lovely day here at Point Pelee and there continues to be good bird activity in the park.
This morning, 4 species of vireo were noted at the Tip (White-eyed, Blue-headed, Warbling and Red-eyed). A very early male Blackpoll Warbler was also seen by many observers this morning. The Brewster's Warbler found yesterday continued to be seen again today. Two FISH CROWS were noted calling and flying NE over the Tip this morning.
Blue-winged Warblers were found in several locations in the park, including the along the road between West Beach and White Pine and on the Woodland Nature Trail. Grey-cheeked thrushes were also noted (very early) along the Woodland Nature Trail, as were Red-headed Woodpecker and NorthernWaterthrush. A Northern Waterthrush was also hanging out around the boardwalk in Tilden's Woods and two Pine siskin were noted at the East Road exhibit along the same trail. Cape May Warbler was a noteworthy sighting from DeLaurier this morning and reports coming in this afternoon have suggested that birding along the west side of the park, on the footpaths north of white Pine have been fruitful.