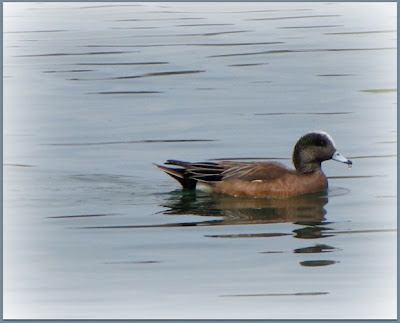 Our earliest migrants return in early March and each week a few more birds make an appearance. With an exceptionally warm spring, I would have thought migration would be ahead of schedule. The past couple of weeks places like Point Pelee and Long Point in south-western Ontario have reported that migration has been slow so far this year. The winds have to be favourable for birds flying north and today we have had strong north winds which would keep birds on the south shores of the Great Lakes. 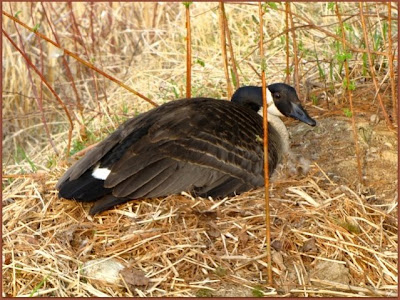 I have been out and about on trails most days and we walked the shores of Lake Ontario at Burlington on the weekend. Cormorants are nesting in colonies, but on the whole, things were very quiet. Canada Geese are nesting and hiss menacingly at anyone who approaches the nest. We have too many geese year round in our area and they produce healthy, large families every season. Walking the sidewalks and lawns in parks and near waterways must be done very carefully in order to avoid all the slimy goose pickles in the way.

Migrant ducks are making their way north and a few stop to rest in our local rivers and ponds. The American Wigeon was swimming with two females at Dufferin Islands Natural Area in Niagara Falls Canada. I saw the ducks in the collage above near our home during this month. 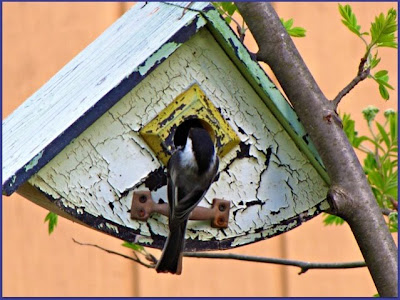 On the home front, the female Black-capped Chickadee has confined herself to the nest as she incubates her eggs. The male visits throughout the day and stops at the entrance just long enough to pass food to her before he flies off in search of more. He calls quietly on a branch above the house before he descends with the meal. I watch them with binoculars from the deck and suppress my urge to peek inside the hole. Perhaps I will have a chance to see the baby birds when they hatch.
Posted by Ruth at 9:43 pm