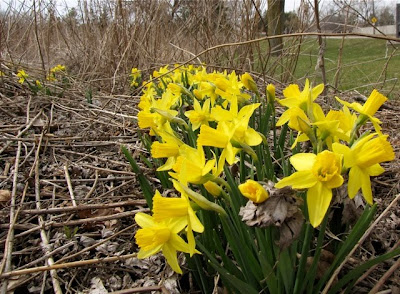 By the beginning of February most Canadians think winter will never end. Groundhog Day is a silly attempt to wish away snow and cold temperatures and by the time spring does arrive, most of us have forgotten what the groundhog predicted. I think spring is often a non-season in this part of the world. Some years we have snow and cold through the month of April and into early May, and then we get hit with a heat wave that lasts through the summer months.

But this year Wiarton Willie, our local rodent prognosticator was wrong!

He apparently saw his shadow and therefore predicted six more weeks of winter. Quite frankly, I believe his handlers had it wrong because the day was overcast and any shadow from the sun on February 2nd was 10% real and 90% imagination. 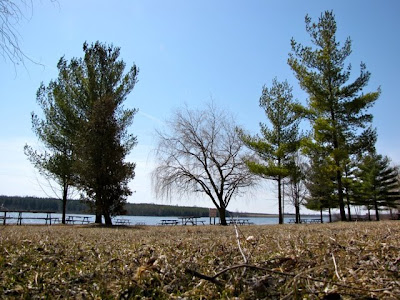 Guelph Lake near the end of last week

Spring came early and stayed on. We had no snow in March which is very unusual, and April arrived with summer-like temperatures. Forsythia is blooming in my garden a good three weeks ahead of usual and spring bulbs are coming up everywhere. This is somewhat alarming because we are sure to have frosts in April and May which could damage early blooming fruit trees. Our mosquito and black fly season is going to have a head start and the ground is exceptionally dry. Vernal ponds in fields and meadows are very small or non-existent so there will be fewer frog choruses heard during their mating season. My husband is concerned about an early start and end for spring lake trout fishing and lakes are rapidly becoming ice-free. 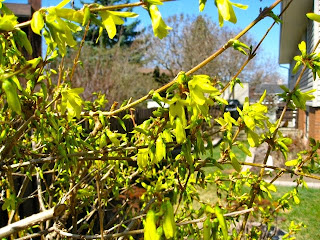 Forsythia in our garden today

Some people will preach global warming and win converts to their theory in this "El Niño" year. But weather norms are averages and our last two winters were exceptionally cold, snowy and long. Last summer was cool and wet and we never needed our garden hose. My niece in Spokane WA is experiencing snow and sleet this long weekend. I like to consider all sides in the climate change dialogue.

Weather is a favourite conversational topic for Canadians, and why not? I plan to enjoy each day as it comes.
Posted by Ruth at 9:18 am

Email ThisBlogThis!Share to TwitterShare to FacebookShare to Pinterest
Labels: environment, seasons of life