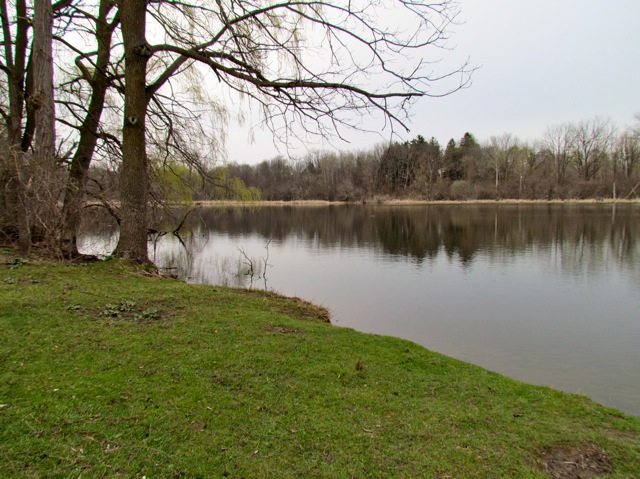 The weather has not been the greatest for spending time outdoors after work. Constant spring rains have left the ground saturated, trails muddy and slippery and the atmosphere damp and chilly. The price of gas has also dampened my motivation to travel to my favourite trails in the region. (This week it is $1.39 a litre and a fill up for my Honda CRV is well over $60.00)

There is a lovely pond at a water pumping station near our home. When our daughters were young, we used to bike there in the evenings to see “the ducks and geese”. In those days I did not look for the many other birds which pass through or nest there seasonally. Yesterday I spent time looking for new arrivals around the pond and adjacent bush. The frogs were in chorus and many bird tweets were recognizable. I sat on a bench with my binoculars enjoying the peaceful evening and counted 21 species in a few minutes. And here are my evening twitterers...

Yesterday was also election day in Canada. We voted earlier and the polls did not close until 9:30 PM. This is the first federal election where social networking has been widely used by candidates, news outlets and voters. Elections Canada banned posting or tweeting election results in the east before all the polls closed in the west. But Twitter is ungovernable and thousands of tweets spread news of local results. One user in Australia offered to post information on Twitter sent to him by email from Canada. The hashtag #tweettheresults was used heavily. 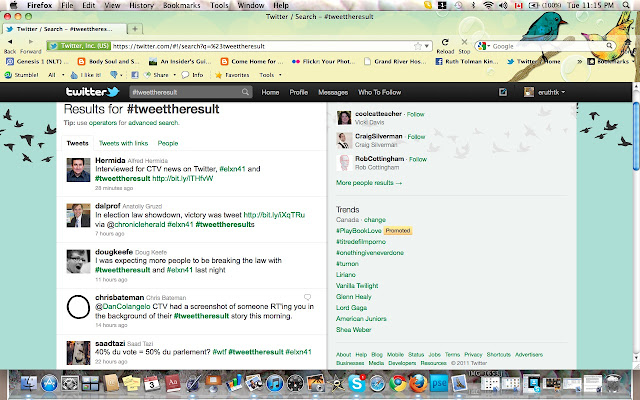 I have never had a Twitter account and the thought of posting my every move and thought (or reading the same from other people) was obnoxiously narcissistic in my opinion. But this year it was apparent that social network use was an invaluable tool in organizing the uprising in Egypt. The attack on Osama bin Laden’s compound was reported on Twitter by a user who did not even realize what was going on near his home. Twitter finally tweaked my interest enough that I set up an account in order to monitor the election results.

And I was intrigued by the real time commentary of ordinary people across our nation. The election results varied greatly from what the pre-election polls predicted and I wondered how much influence the tweets had in the end. It was a good night to start using Twitter in order to gain an understanding this network although I did rely heavily on my teacher, the Becka.

I am not looking for followers but I am following a few sites of interest. Already I see that twitterers have the attention span of fruit flies as trending topics around the world today are far removed from the discussions of yesterday. But they are a force for change in our ever-changing world.
Posted by Ruth at 11:28 pm

Email ThisBlogThis!Share to TwitterShare to FacebookShare to Pinterest
Labels: birds, people and places, this and that