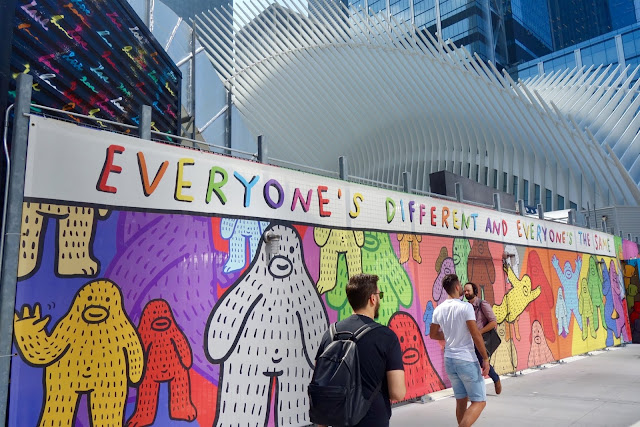 We enjoyed a 5 day vacation in New York City this August. I booked the trip mainly because I wanted to see Come From Away on Broadway and that was a memorable highlight of the trip. I went to NYC with our daughters in 2008 and while some things were little changed, we explored several areas that were new to us. A city this big is impossible to cover in a few days

We spent a morning in the area of the 9/11 Memorial and Museum. The design of the museum, grounds and the adjacent Oculus centre is beautiful and highly symbolic. I saw several visitors expressing raw grief and I wondered at their loss and connection to the site. There were thousands of messages incorporated in the exhibits and they spoke of love, courage, sacrifice, forgiveness, and resilience. The best of human behaviour often shines in times of great loss and one could not help but be moved by the stories that were featured. America appears as a divided, unhinged country from my view in Canada, but we talked with many rational and thoughtful people in Manhattan who do not mirror their leader in attitude or behaviour.

I will watch the midterm election results with interest tomorrow but whatever the outcome, I will remember with hope the good will that was represented at the memorial. We tend to forget the past so quickly.

Here are a few pictures of the area. I would highly recommend taking the time to visit New York City. We went on a bus tour that offered some scheduled events as well as daily drop offs in the city which gave us plenty of free time to explore on our own. There were school-aged children in our group and I commend their parents for giving them a good introduction to the city.