Thoughts on English spelling and grammar

English is my first and only language. One of my few regrets in life so far is that I did not learn another language fluently. The language centres in my brain are no longer plastic enough to learn the nuances and unique sounds used in order to speak another language without a strong accent. 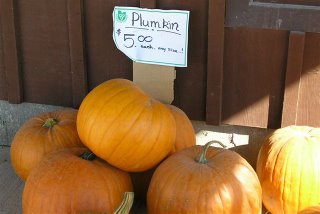 I took the picture of this sign at the farm where we buy our apples. I have no idea who created the misspelled sign, but we had a good chuckle when we saw it. I have been acutely aware of my weaknesses in spelling and grammar since starting this blog. I labour over phrases and spelling, aware that readers may find an error as glaring as the one on the sign. In Canada we use a mixture of British and American spelling, for instance colour and labour, rather than color and labor. But we use the American spelling of pediatric rather than the British paediatric. I have been told that learning a language such as Spanish is much easier than learning English, as there are fewer grammatical and spelling irregularities. Both my brothers who live in Mexico have schools where English is taught as a second language. I sat through one class earlier this year while the students conjugated verbs in the past tense (ugh!) and practiced a vocabulary list. 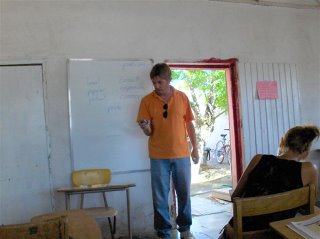 I conjugated French verbs and memorized many vocabulary lists for 7 years in school and cannot carry on a conversation in Canada’s other official language.
The most notorious English words end in “ough”. The words rough, through, though, trough, plough, thorough, hiccough, and cough are similar in spelling, but all are pronounced differently. “Eye” and “I” and “ewe” and “you” have no similarities in meaning or spelling, but sound exactly the same.
Recently I told one of my patients to “lay down on the mat” in order to do his exercises. He quickly corrected the common grammatical error I made and reviewed the usage of lay and lie and laid for me. No wonder so many people are labeled “dyslexic”!
So I have purchased a small style book and am reviewing…I should say learning…things I was never taught in school about English grammar.
Posted by Ruth at 7:31 pm

Email ThisBlogThis!Share to TwitterShare to FacebookShare to Pinterest
Labels: mexico, this and that