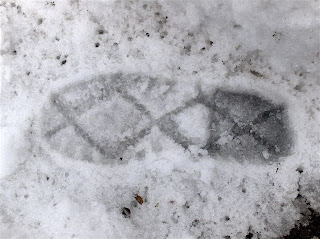 The winter storm that started yesterday continued over night in the form of freezing rain. Because there was a layer of snow on the ground already, ice pellets formed making it feel as if you were walking through a load of white sugar. Other than scraping thick ice off the car, there was no glare ice to deal with on the sidewalks and roads. I pulled out my Yaktrax for the first time this year. I have had a couple of bad falls on ice over the years that left me with broken bones. It took me a long time to get over my fear of falling on icy days, and my family would escort me over slick terrain as if I was an old lady.

I read about this product first in a medical journal. The study entitled , "A Simple Gait-Stabilizing Device Reduces Outdoor Falls and Nonserious Injurious Falls in Fall-Prone Older People During the Winter" was published in the Journal of the American Geriatrics Society in June 2005. The Canadian Physiotherapy Association endorses them, and I recommend them to my patients. 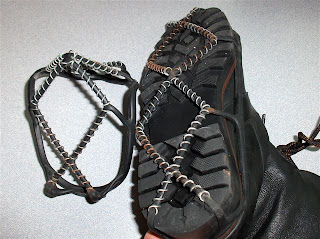 I bought my first pair last year for about $30.00 CDN and used them on a daily basis for three months of winter weather. I hardly ever walked on the (despised) treadmill as I was able to venture outdoors with safety. There is a little rust on the coils, but the rubber is not worn at all. They are small enough to slip in a pocket or bag, and are as easy as toe rubbers to put on. (Does anyone remember toe rubbers?)

There was a break in the freezing rain at , so I was able to go out a walk the trail high above the river. I even went up the steep bluff without sliding a bit. 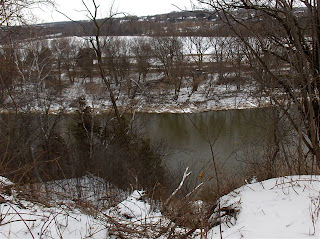 I know there is a great white yak who has been described on occasion in cyberspace, and I assure you I do not know what his tracks look like. I have even lurked at his herder's cave intermittently. This product is not related in any way, although anyone, human or Yak, over 40 years old should use Yaktrax on snow and ice.
Posted by Ruth at 5:33 pm