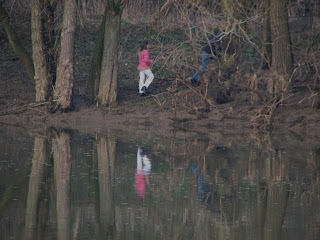 The weekend was cool and rainy, hardly inspiring for outdoor activities. My husband and I went out in the late afternoon and walked a section of the river where the trail climbs high on the bluffs, allowing for better drainage and less mud. The dreary day was not inspiring for birds either and all we saw were robins, geese and red winged blackbirds. I took a picture of a couple walking on the opposite bank. Why is she wearing white pants?! except to catch my eye for a photo.
The sun came out briefly as we returned to the car and so did the birds. Larry wrote recently about the difficulty in photographing the hyperactive and tiny Golden Crowned Kinglets. 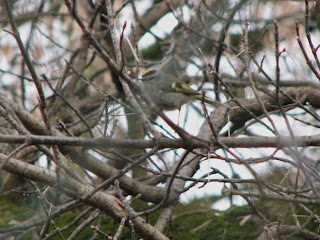 I took many pictures of bare branches and almost discarded this photo as well until I noticed that I had actually captured a picture of one of them. (I have a larger image on Flickr).
Last evening I received a couple of emails from the 10 year old son of my first cousin. I have only met Samuel once when he was about 4 years old. He has a great interest in birds and nature and is a very intelligent boy. Here is a summary of his first two messages.

Hi, Ruth
This is Sam, Oma Lois's grandson. I read your blog sometimes and that bird of prey you saw over the feild, I think it was a immature Turkey Vulture. Have you ever been to Point Pelee National Park? Well, I think you should because I saw over 50 species of birds and over 20 species of other wildlife there. In fact, that was the first time I saw a Hairy Woodpecker. Its located in southern Ontario and I think this is the park's website.

I replied and told him about the Kinglets and he responded this morning with,

Well, if this isn't an exceptional young man! I will have to direct him to Mon@rch and The Brownstone Birder for some male mentoring.