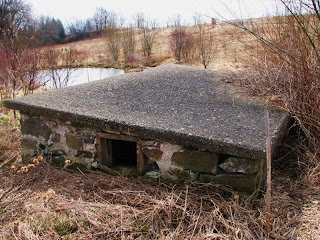 The trail we walked this past weekend went through an old Mennonite farm that has been operational for at least six generations. The most interesting feature for me was the old ice house. I remember Grandma describing the ice box in her kitchen on the 1920's and how she would buy ice in the summer, just like we now purchase ice for our coolers. I never really gave much thought as to where the ice she was talking about came from.

This ice house was built into the bank of Critter Creek, a perennial creek fed by groundwater that runs through the property and into the Grand River. In the winter, chunks of ice would be cut from the creek and river and dragged by sled into the ice house. Layers of straw would add extra insulation and the ice could last into the late summer, or perhaps even into the next winter. 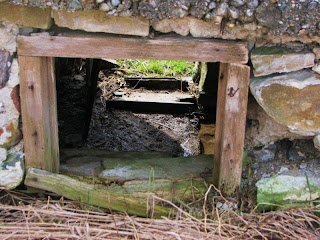 How could a person get through the summer, or any time of year without a refrigerator? I have given thought to that since I saw this ice house. There are certain members of our household who consider ice cream to be an essential daily food group. When I return from grocery shopping the fridge is crammed full of items that cannot stay in the cupboard. Many people I know have two fridges as well as additional freezers.

One of my favourite childhood books was Anne of Green Gables by Lucy Maud Montgomery. In one part of the story, Anne was beside herself with excitement because ice cream was going to be served at the church picnic. Imagine a twelve year old who had never eaten ice cream! Through a misunderstanding, she was grounded and denied this special treat, and her disappointment was almost too much to bear. The ice cream would have been prepared in a crank with ice from the previous winter.

I don't know if the Old Order Mennonites still use ice houses, especially those who live without electricity. I imagine they would use gas refrigerators. Many of them sell baked goods, meats and cheeses at our local markets, and it is unlikely the health department would allow unrefrigerated items like these to be sold to the public. I wouldn't want to use the ice from our local streams and rivers in my food due to contamination that is present from many sources. 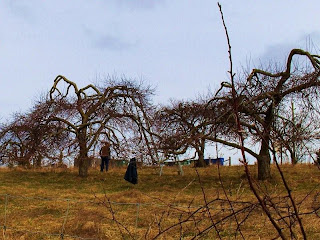 On another note, this farm had a very old orchard with gnarled trees that were being pruned by the farmer. The deer had eaten a lot of bark in the winter from the lowest branches that touched the ground. I was reminded that our local bee hives have been affected by the mysterious bee colony collapse that has occurred across the continent. This is a small orchard, but like the big ones, it will be dependent on bees to pollinate the blossoms in a few weeks. Laura at Natural Notes wrote a recent post about the bee problem.

Do you have ice house or ice box memories or stories? Or have you lived for extended periods of time without a refrigerator?
Posted by Ruth at 6:50 am

Email ThisBlogThis!Share to TwitterShare to FacebookShare to Pinterest
Labels: Mennonites, this and that