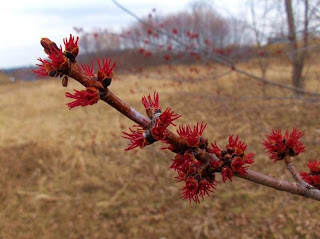 Early spring in Ontario is devoid of much landscape colour. If one looks closely under the cover of dead grasses from last season, green shoots are visible and new vegetation is growing. For most of this week the skies have been grey and the earth brown. (Yesterday everything was once again covered in a spring snowfall and we will have a white Easter!). I was walking in a field near our house and came across this red maple tree in bloom. 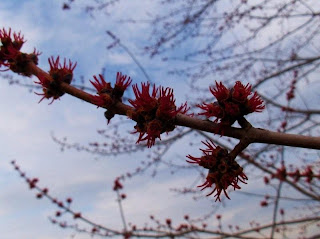 The beautiful and delicate red flowers were just opening up. The red maple blooms very early in the spring, about the same time that pussy willows are found. The leaves will not develop for a few more weeks, usually around the first of May in this area.
Canada's arboreal emblem is a generic maple leaf and it features very prominently on our national flag. "Of the 150 known species of maple (genus Acer), only 13 are native to North America. Ten of these grow in Canada: Sugar, Black, Silver, bigleaf, Red, Mountain, Striped, Douglas, Vine and the Manitoba. With the exception of four species, native maples are large trees. At least one of the ten species grows naturally in every province." (source) 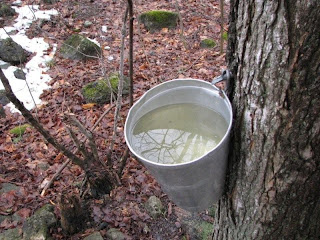 Yesterday we were driving north of the city and noticed many maple sap collection pails in the woodlots. This is peak maple syrup production time in our region. Last Saturday, 70,000 people attended the annual Maple Syrup Festival in nearby Elmira, Ontario. Many Old Order Mennonite farmers sell maple products and small sales tables are often seen at the end of their laneways. The sugar maple is used primarily for maple syrup, but red maple sap, although lower in sugar content, can also be used.
This tree gives early spring a red start and ends the growing season in a fall blaze of red leaves.
The weather gives the impression of a slow start to spring, but nature is opening up on schedule if we take the time to observe. 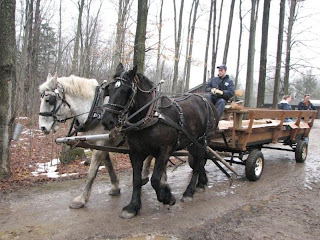