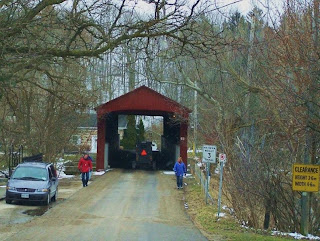 I received a very interesting comment on my post An Old Order Mennonite Sunday from Erik Wesner who writes a blog called Amish America. He has a lot of interest and knowledge about Old Order Anabaptists and his blog is worth visiting. In his comment he wrote,
"...the majority of OOMs in Waterloo County use only open vehicles--
which looks to be the case in your pics,
though I don't know if that is your exact area or not.

Another one of your pics (Feb 1)shows a squarish-looking closed-top--
reminds me of the buggies around Nappanee, Indiana--
they always seemed a bit boxier than the Amish ones in the area.
I wonder if those are related to Pike Mennonites,
which is supposedly one of the most conservative groups it seems."

The pictures I posted on Sunday were all of open carriages, mainly because I found the faces of the people more interesting than the buggies they were driving. My parents took all the pictures in this post, including those that show a variety of closed buggies. 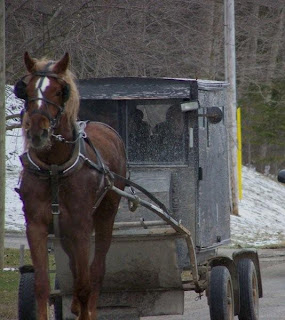 We followed this buggy through the covered bridge shown at the top of the page. It had rubber tires, which are forbidden by stricter sects of Old Order Mennonites. A couple of small children were peering out the back window if this small box styled wagon. 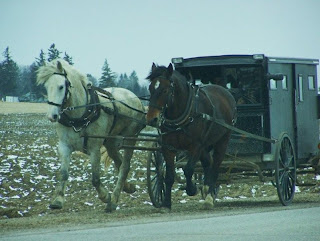 This lovely team of horses pulled a much larger buggy at a good pace down the highway. You can see the difference in the style of the wheels. 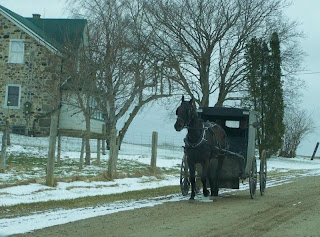 This very bony and mangey horse pulled a smaller buggy past a house with fieldstone walls. We saw several farmhouses built in this fashion in this area near Elmira, Ontario. 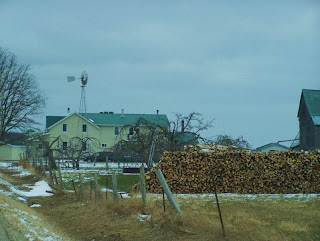 Erik also commented on the solar panels we saw on this farm house. If you look on the roof line to the right of the windmill, you can see the three panels.

And the solar panel thing surprised me as well too--
I've actually seen these in quite a few midwestern Amish communities,
some of them powering electric fences. I like this as another
example of the Amish way of making decisions on technology--I feel it's quite a sophisticated decision-making process concerning what tech they do and don't allow.
This farm had no electricity lines, but several black cars were in the driveway. The Conservative Mennonites drive black cars rather than horses. It is not unusual for one family to have members belonging to different Mennonite groups. My neighbour was raised in an Old Order home, but left to join the most progressive church. She and her husband were welcomed at family gatherings in their Old Order extended families and she always felt a close kinship with them.
I have been doing some reading this week on the Mennonites in our region. There are many different groups that have formed because of various interpretations of what constitutes a plain life. We had an Old Order lady admitted to our rehabilitation unit this week, which is quite unusual as many of them do not join our federal health care or pension plans. While her family uses a horse and buggy, she was transported by ambulance for treatment following her serious accident. On Kevin Williams' blog, The Amish Cook, (Kevin is Susan Gets Native's relative) he writes about the quandry in deciding whether cell phones are acceptable technology for the Amish community.

Technology is changing the world at a dramatic pace. It must be difficult for the Old Order people to maintain a lifestyle based on how their ancestors lived hundreds of years ago when they must interact with the outside world that is so different in customs and values. 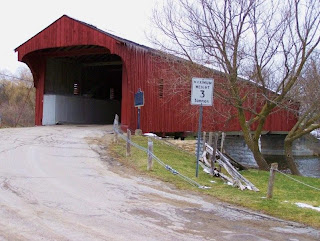 The Kissing Bridge at West Montrose, Ontario
(between Elmira and Guelph)
Posted by Ruth at 12:00 am

Email ThisBlogThis!Share to TwitterShare to FacebookShare to Pinterest
Labels: Mennonites