Today is garbage day and we have more than usual at the curb because my parents and eldest daughter have been here this week. This is what six of us have discarded in a week. I have a composter, my husband disposes of our garden trash at a clean fill site, and we recycle everything allowed by our municipality.

At the end of our street is a "park" that was once a landfill site. When we moved here in the mid-1970s, the dump was just closing and many truckloads of dirt were used to cover the rotting garbage. After the ground was covered, large amounts of methane gas were created and a whole block of new homes was evacuated for at least 10 years while pipes and vents were constructed to remove the dangerous gases. For years a large flame burned on the hill as the gas was burned, and a local factory, Best Pipe, fueled its operation with methane from the dump.
The houses are occupied once again, the gas fire is gone, and there are people who do not even know the history of this site. 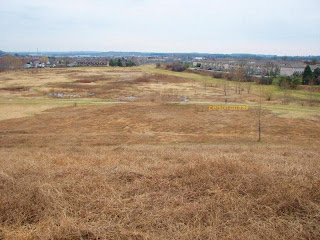 This large field and hill, locally known as Mount Trashmore, is becoming naturalized and is a great place to take the dog for a run. To give an idea of scale, there is a person walking on the trail in this picture I took from the top of the hill. The hill is a popular spot for tobogganing in the winter. 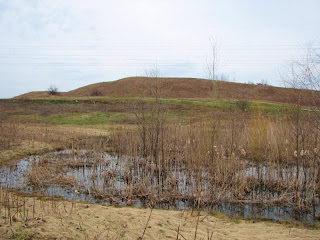 I have written several posts about this park. This is where the Red Winged Blackbird swamp is located. This week I have seen Kildeers and an American Kestrel, as well as the pair of Red Tailed Hawks who have claimed this territory. The Red Maple featured last Friday was pictured here as well.

Earlier this year we went to the Ontario Science Centre in Toronto. The exhibit on garbage was most interesting. Core samples were taken from old land fill sites in the the area, and surprisingly, even materials like paper, consider to be biodegradable, were completely intact after 50 years. Dated newspapers and letters from the 1950's and 1960's were on display and were completely legible. 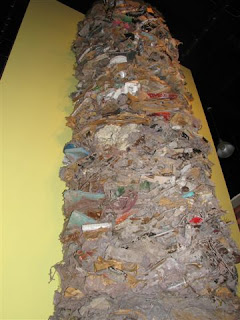 This is a picture of one of the core garbage samples. An anaerobic environment is created when the packed trash is buried, and it does not decompose. I shudder to think about what is under the ground of Mount Trashmore. In the cattail swamp, we noticed an area with an oily film on the water, no doubt from the buried "treasure" beneath. When this dump was created, toxic materials and recyclables were not sorted out as we are encouraged to do today.

Each spring, the retreating snow reveals the garbage thrown out on the roadways over the winter by people too lazy and indifferent to use a trash can. I expect that these people would not take the time to recycle and compost garbage either. Our society is now generating large amounts of electronic garbage as computers and accessories are frequently replaced. Garbage is even a bigger problem in third world countries where services are not available for garbage collection.

If I participate in the Bioblitz, officially or unofficially, I will choose an area of this old landfill and examine how this man-made site is being naturalized.
Posted by Ruth at 3:00 pm