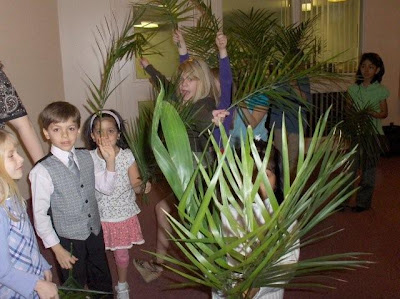 But when the chief priests and scribes saw the wonderful things that
Jesus did, and the children crying out in the temple and saying,
"Hosanna to the Son of David!"
they were indignant and said to Him, "Do You hear what these are saying?"
And Jesus said to them, "Yes, Have you never read,
Out of the mouth of babes and nursing infants
You have perfected praise?"
Matthew 21:15, 16

The Sunday School children have been practicing a song for Palm Sunday over the past few weeks. I took a picture of them this morning as they were lining up to enter the sanctuary with their palm branches. Their natural exuberance and enthusiasm is what Jesus was referring to in the above scripture. I love these children for their honesty, openness and accepting faith. Jesus was not of the school that dictates 'children should be seen and not heard'. In fact, He said that unless we become as little children we cannot enter the kingdom of God. And He also taught that anyone who offended a little one would be better off with a millstone around his neck, drowned in the depth of the sea.
It is hard to even contemplate the suffering of many children in the world. I have to believe that there will be a time for God's justice in the future, a time when the sound of children's voices, raised in praise, will be heard by all.
Posted by Ruth at 3:40 pm