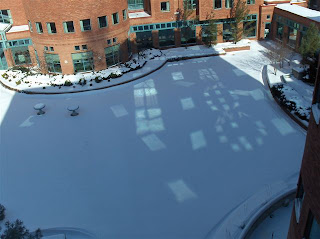 Two years ago our hospital was the site chosen to film a movie written and directed by Sarah Polley. For several weeks we watched the cast and crew working long hours inside and outside the building. I took the above picture of the hospital courtyard when real snow was on the ground. For the film, the same courtyard was covered with large sheets of fake snow and water was sprayed on it and allowed to freeze. It was winter, but not as snowy as this one has been.

We watched Sarah Polley grow up on the screen in the very popular CBC television series Road to Avonlea. It was a favourite show and we taped each episode on Sunday evenings so the girls could watch it again during the week. This talented young woman made her directing debut with this film and what a success it has been. Last night Away from Her received seven Genie awards including best picture, director and adapted screenplay. Polley and Pinsent are shown in the picture to the left at last night's award show in Toronto. It was very well received at film festivals and was nominated for an Academy Award for best actress (Christie) and best adapted screenplay.

Hospital employees were able to pick up free tickets to see the movie at the theatre last year. I was unable to go, and Becka used my ticket. She found the story very depressing and said, "I never want to get old!" It just came out on DVD and I finally watched it last night. It was very, very well done.

The movie is based on a short story by Alice Munroe called The Bear Came over the Mountain. Fiona (Julie Christie) and Grant ( Gordon Pinsent) have been married for 50 years when Fiona develops Alzheimers Disease. She is placed in a nursing home that has a questionably policy of not allowing any visitors during the first month of the resident's stay. Fiona develops an attachment to another cognitively impaired resident, Aubrey (Michael Murphy) and forgets who her husband is. Grant visits regularly and remains an outsider in his wife's new world. The emotional journey he takes encompasses the past and present and the flashbacks are woven beautifully into the story. The ending is poignant and bittersweet.

I found this movie more realistic than The Notebook, a film with similar subject matter and themes. As a health care professional, I found the attitude of the nursing home staff to be superficial and condescending at times. I wondered if I tend to give pat, textbook answers to my patients and their families who are struggling emotionally with a difficult diagnosis.

It was interesting to see our hospital building featured in the film. Fiona's room in the nursing home is our current physiotherapy treatment room and is still painted the dark purple colour chosen by the set design team. The dining room, front entrance, corridors and elevators are not disguised at all. Grant and Fiona's home is in the country and the sign along the highway that reads "Brant Conservation Area, Grand River Country" is a familiar landmark. I could hear the chickadees calling in the trees outside their home. Working on a dementia unit, the entire story is familiar and realistic in many ways. 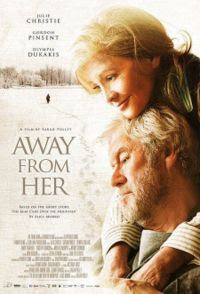