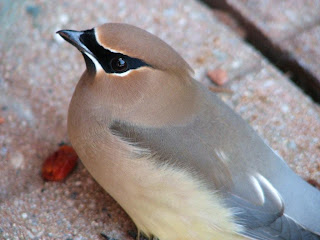 The weather remains cold and the ground is still covered in deep snow but local bird activity has increased noticeably. Bird song is heard again as the sun rises and each week new birds are arriving back from their winter migration. Cedar Waxwings are one of my favourite birds and I have been seeing them around over the past three weeks or so.

Today they were feeding on the ornamental crab apple trees on the hospital grounds. At noon, one of my co-workers noticed two Cedar Waxwings just outside one of the back doors of the building. They had struck a window and one of them was dead. The other bird, presumably its mate, was huddled on the ground beside it not moving at all. A couple of hours later the living bird was still there and I was concerned that it was injured. 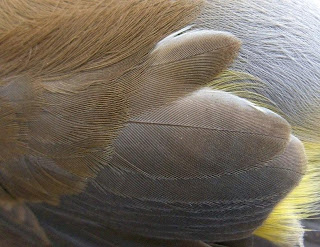 I had no idea what to do and called our local Humane Society for advice. They offered to come out right away to collect the birds, but I preferred to bring them in myself later in the afternoon if necessary. My friend put the dead bird in a box and then tried to pick up the other one. Fortunately it was able to fly and went to a windowsill before it rejoined the rest of the flock in the nearby fruit trees.

Nina has written about birds stunned by window strikes on her blog, but it seems that most of them have recovered fairly quickly and are able to fly away. It is illegal to capture migrating birds* and I don't know of any bird rehabilitation centres that treat birds other than raptors. I have asked for advice on how to deal with injured birds our local birding forum.

Migrating birds face many hazards as they travel. Watching a hawk capture a small bird does not bother me as much as seeing a bird hurt by a man made structure. I know thousands of birds die each year in window strikes especially in our big cities. 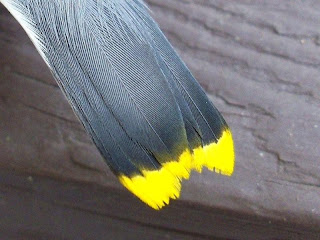 The dead bird is in a box in the yard and I will have to dispose of it in a dignified way. I hope its mate will survive and find another partner in the flock.