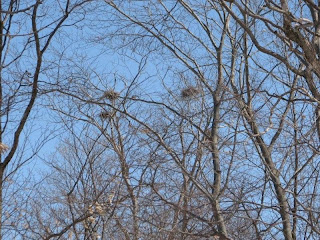 Great Blue Heron Rookery near Guelph Ontario
Donna, at KGMom Mumblings wrote an interesting post yesterday about the loss of wild life habitat related to development. Our local paper is seldom without a story of some battle between environmentalists and developers. Right now there are ongoing fights to save the home of the Jefferson salamanders from a new highway, and resistance to paving over a moraine to the north that is important for recharging ground water.

Last year I hoped to find a Great Blue Heron rookery. I finally found one (with help from some birding friends) and was surprised at the location of the many nests high in the trees in a marsh area near the Grand River. I saw one bird in a nest already even though it seems a little cool to be laying eggs. This story regarding the destruction of GBH nests was in today's paper.
Migratory bird act opposed by N.B. forestry giant TheRecord.com - CanadaWorld - Migratory bird act opposed by N.B. forestry giant
Chris Morris The Canadian Press

New Brunswick forestry company, J.D. Irving Ltd., is challenging Canada's laws protecting migratory birds at a time when experts warn that some bird populations are in free fall. Arguments began yesterday in New Brunswick provincial court on an application by Irving to have the Migratory Birds Convention Act declared unconstitutional.
The company filed the application after it was charged under the federal act as a result of the destruction of several great blue heron nests during a logging operation in Cambridge Narrows, N.B., in 2006. Irving has pleaded not guilty to the charge, but in advance of the trial, it introduced a motion challenging the constitutionality of the act, which has been on the books since 1917. Irving is claiming that the Migratory Birds Act violates the Charter of Rights.

"As well, we say it is unconstitutional because it really is provincial jurisdiction, not federal jurisdiction,'' said Irving lawyer Christopher Wayland of Toronto.

Prosecution witness Steve Wendt, a former director with the Canadian Wildlife Service, told court that protection of migratory birds is just as important now as it was 90 years ago, when the convention was enacted by the United States and Britain on behalf of Canada.

"When the migratory bird convention came into being, people had observed several extinctions,'' Wendt told the court, using the disappearance of the passenger pigeon as an example. "There was a lot of concern then and we have similar concerns now.''

Wendt says a number of migratory birds -- including such insect-eating species as the common nighthawk and the swallow -- are vanishing from the Canadian landscape. That's making the protection of remaining habitat critical. The Audubon Society recently published a list of songbirds that are disappearing at alarming rates from North America, including such once-common species as the evening grosbeak and the field sparrow.

Roland Chiasson of Nature New Brunswick, who attended court proceedings, asked, "If this act is struck down, what is going to happen the day after?''

A large forestry company is looking for lumber, not nests, and while Great Blue Herons are not endangered (yet), invoking the Canadian Charter of Rights is an extreme action for their defense. 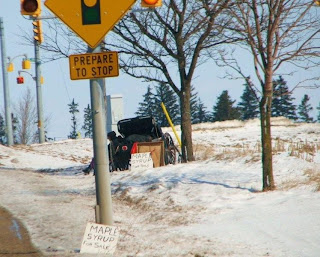 The rookery I saw is in the heart of Mennonite country and there is nothing but farmland, bush and swamp for miles around. But fifty years from now that could be very different. Laws like the Migratory Birds Convention Act are necessary now and later to protect vulnerable species that cannot adapt to the rapid change in their environment brought on by human activity.