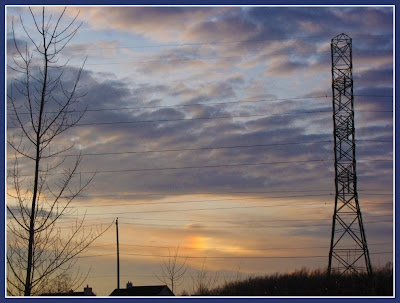 Today marked Earth Day 2009. Last year I took a number of photos to reflect the theme of the day and posted them here on my Flickr page. April 2008 was warmer than this month as my forsythia was already blooming. Today we had drizzle, snow flurries and cold winds so I did not spend a lot of time outdoors. 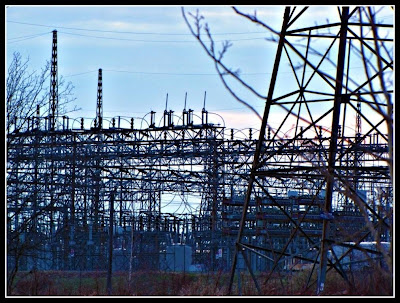 On the eve of Earth Day, we had a beautiful sunset as there was a short break in the clouds that have filled our skies all week. I drove northward along the west edge of the city and followed the hydro towers that spread out from a nearby hydro station. A new throughfare has been built here and acres of land have been cleared for new subdivisions and businesses. Urban sprawl is so unattractive with row upon row of identical houses crowded onto small lots. 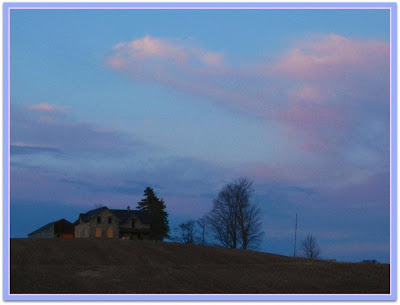 An abandoned farm destined for "development" lay beneath a pink and blue sky, the boarded up windows of the old homestead glowing eerily in the light of the setting sun. How many new houses will fit on this hill? 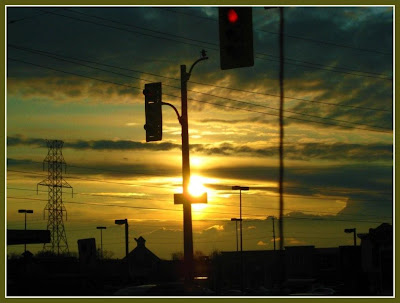 The sun illuminated wires, light standards and rooftops as the colours of the sunset changed quickly. I pulled into a nearby strip mall and parked beside garbage dumpsters in the rear to take these pictures. The man made structures were insignificant compared to the grandeur of the sky. 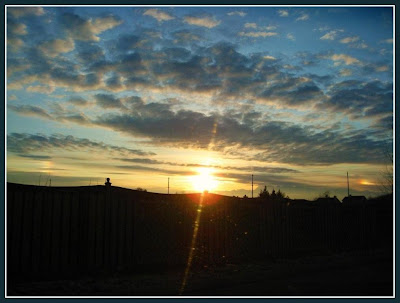 At one point, a pair of sundogs was seen on either side of the sun. Ice crystals in the atmosphere refracted the light creating the phenomenon seen most often on very cold winter days. (I have outlined the sun dogs in this picture if you are unable to see them here)

Cities rise and the natural landscape is paved over, rerouted and subdued. Man controls the power coursing through wires and grids, but his efforts are child-like compared to the power and beauty of the sun and the atmosphere.

Does the earth need to be saved by mankind?

Or is it mankind who needs to be saved from destroying himself?

Click here for more Skywatch posts from around the world
Posted by Ruth at 11:00 pm