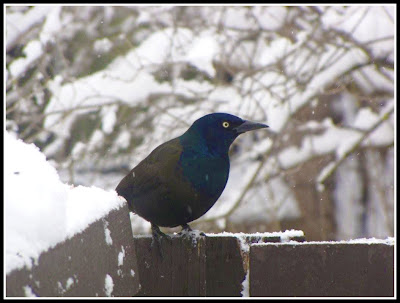 We have had several inches of snow over the past two days and while it is an inconvenience for us, it is a real hardship for the birds. Yesterday I heard the calls of Red-winged Blackbirds outside and saw several of them at my feeder. We have never had these birds in our yard. A group of Common Grackles joined them and added to the noise as they competed for my single, small sunflower seed feeder. 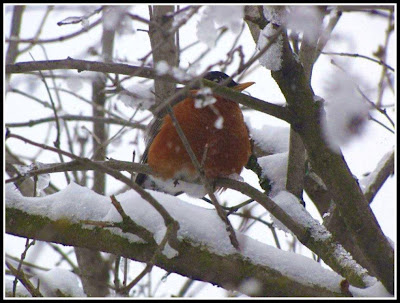 A couple of Robins fluffed their feathers against the cold and watched from the snow covered branches of the lilac bush. I felt sorry for them and placed some plumped up raisins in a dish on the picnic table. As far as I could tell, they never tried my offered treat. 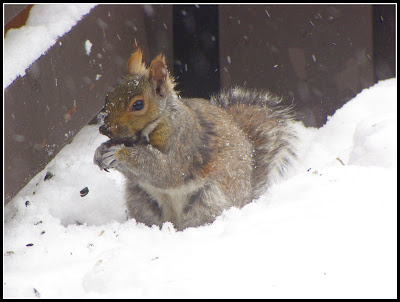 However, this very well fed squirrel was into the raisins and peanuts in a flash. He is one of several squirrels who manages to conquer any "squirrel-proof" feeder I hang on the deck. 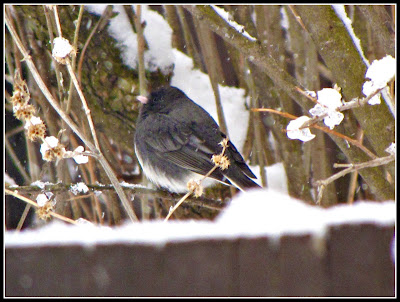 There are still a few Juncos about and this snow must be confusing the spring signal that tells them to fly back up north. I have seen several American Tree Sparrows and Pine Siskins around this week too. 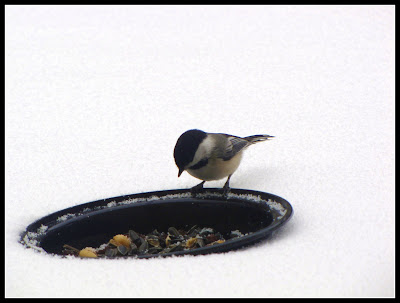 The Chickadees enjoyed the GORP (good old raisins and peanuts) and the sunflower seeds I put out for the ground feeding birds. It was a busy day on the deck with a good mix of winter and spring birds. The temperatures are supposed to rise above freezing by Thursday and hopefully the snow will melt by the weekend. In any case, these are the LAST winter pictures I will post this season!