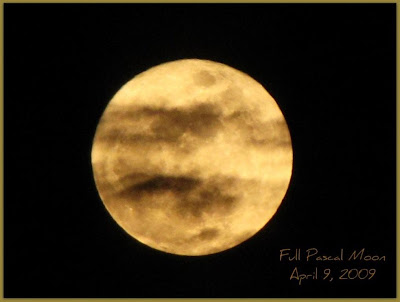 The Becka and I drove outside the city last evening at dusk to watch the rise of the full moon. There were bands of light cloud in the sky marking the surface of the orangey ball as Becka took this picture. The Pascal Moon describes the lunar cycle which occurs after the vernal equinox. This cycle determines the date of Easter each year with Resurrection Sunday being the first Sunday after its full moon.

The observance of Easter has become removed from its origins in the Hebrew Passover celebration. In many European languages, the word for "Easter" is derived from "Passover";- Pascha in Greek and Latin, Pasqua in Italian, Paques in French, and Pascua in Spanish. The Paschal lamb is symbolic of Jesus who died to redeem a sinful world. 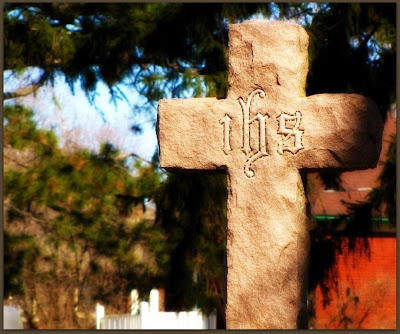 Greater love hath no man than this,
that a man lay down his life for his friends. John 15:13
Handel's Messiah was originally performed in Dublin on April 13, 1742 in a secular theatre. Today we usually hear selections from the first of its three parts at Christmas, but much of the oratorio deals with the passion and resurrection of Jesus, the Messiah. Handel's selection of scripture from Isaiah 53 and some of the Psalms in Part 2 is as follows:

CHORUS
Behold the Lamb of God that taketh away the sin of the world.

AIR (Alto)
He was despised and rejected of men; a man of sorrows and acquainted with grief. He gave His back to the smiters, and His cheeks to them that plucked off the hair: He hid not His face from shame and spitting.

CHORUS
Surely He hath borne our griefs, and carried our sorrows! He was wounded for our transgressions; He was bruised for our iniquities; the chastisement of our peace was upon Him. And with His stripes we are healed.

CHORUS
All we like sheep have gone astray; we have turned every one to his own way. And the Lord hath laid on Him the iniquity of us all.

RECITATIVE. (Accompanied - Tenor)
Thy rebuke hath broken His heart; He is full
of heaviness. He looked for some to have pity on Him, but there was no man, neither found He any to comfort Him.

AIR. (Tenor)
Behold, and see if there be any sorrow like unto His sorrow.

RECITATIVE. (Accompanied - Soprano)
He was cut off out of the land of the living; for the transgression of Thy people was He stricken.

AIR (Soprano)
But Thou didst not leave His soul in hell; nor didst Thou suffer Thy Holy One to see corruption.

We are drawn to stories of sacrifice and redemption. How many great movies and books can we name where these are the themes? A brother of my friend was in a car accident and suffered kidney failure due to the pain medications taken during his recovery. His siblings agreed to be tested as live donors and one sister who was an excellent tissue match gave a kidney to her brother. He lives today because of her sacrifice. Countless others have given their lives to save those they love. 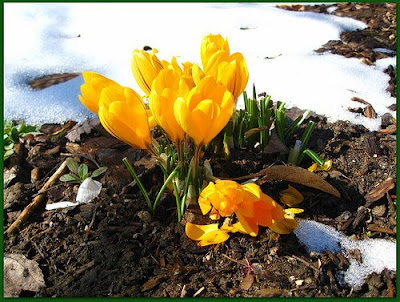 Many Christians remember Jesus' death on the cross today and will celebrate his resurrection this Sunday. It is not hard to recognize "death to life" symbolism each spring as new growth breaks out of the frozen, dead earth. Here, in Part 3 of Handel's Messiah are the words from Job 19:25 and 1 Corinthians 15:20.

AIR (Soprano)
I know that my Redeemer liveth, and that He shall stand at the latter day upon the earth; and though worms destroy this body yet, in my flesh shall I see God. For now is Christ risen from the dead, the first-fruits of them that sleep.