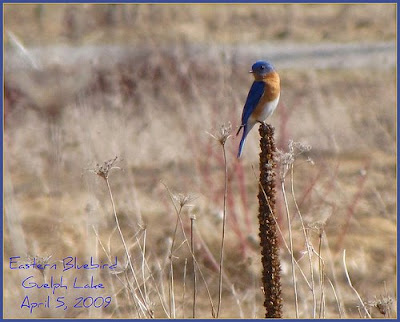 I saw my first Bluebird last April with binoculars and managed to get a very fuzzy photograph as a record of my sighting. Perhaps half a dozen sightings were reported on our birding forum last season outside of the Guelph Lake area. Bluebirds are not endangered but many people are encouraging them with Bluebird box trails in rural areas of Ontario. 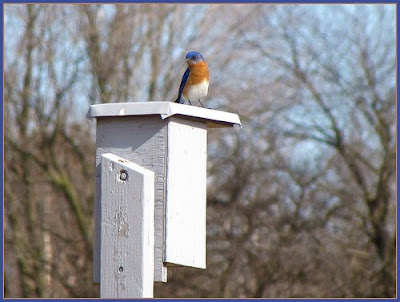 Bluebird on April 5th. This box is now used by Tree Swallows

I saw this Bluebird and several others on April 5th in a field where a number of bird houses were erected. We went back this past weekend and the very box where I photographed the Bluebird was occupied by the Tree Swallows I featured in my last post. It seemed that all the boxes in the area were claimed by Tree Swallows. We walked about half a kilometer down the path and found one Bluebird defending another house against four persistent swallows. There were at least 20 houses in the field and some appeared vacant. 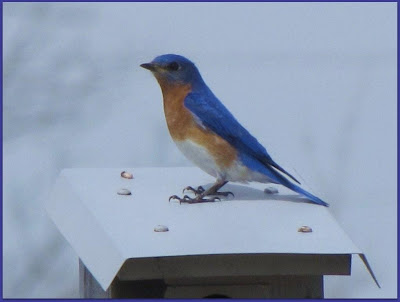 Both Bluebirds and Tree Swallows are native birds, but our sympathies were with the Bluebird, just because it seemed so outnumbered. When researching the problem on the internet, I found this interesting article about Bluebird/Tree Swallow competition on a Tree Swallow Projects webpage. The author** minimizes the problem and gives a historical perspective on Bluebird populations. (** Chris Gates, has left a thoughtful comment on this post)
Whatever issues there are between these two species, the numbers of Bluebirds in our region appear to be increasing. I have seen several this season and hope to be able to observe their behaviour more closely over the next few weeks. 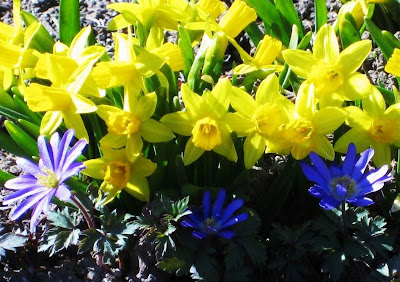 In conclusion, here are the first daffodils I have seen outdoors this season. Are they in competition for space with the blue windflowers?* I think not, and the two go very well together. Hopefully the Bluebirds and Tree Swallows will also come to some sort of truce and share their space as well.
(* Thanks AC for the ID!)
Posted by Ruth at 11:07 pm