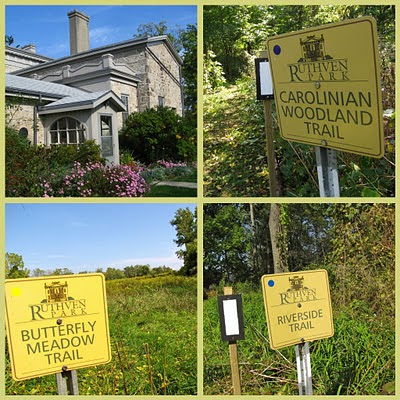 Ruthven Park is situated along the Grand River near Cayuga, Ontario. It was a 19th century estate developed in 1840 by David Thompson and tours of the mansion and outbuildings are available. There are marked trails in various habitats including riverside, meadow and woodland areas. The perennial gardens around the house and scattered feeding stations attract birds as well. 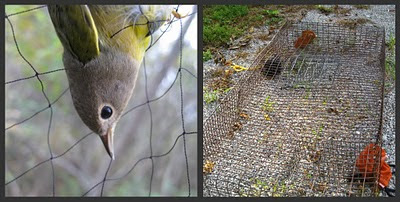 Birds are collected in mist nets or in ground cages. I believe there were about ten nets around the park and two sets of cages near the house. The trapped birds are removed, placed in individual cloth bags and are carried to the banding station. Each bird is inspected carefully, banded and the released as quickly as possible. The sex, age, weight, wing length, fat storage and muscle development details are recorded as well as information about the time, date, and location of the banding. 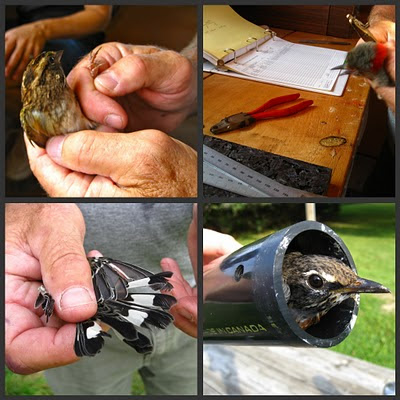 Rick Ludkin is the master bander and his skill in handling birds and quickly assessing them is admirable. He also keeps an excellent blog detailing daily happenings which you can follow here. I met Nancy and Liz who help out on a regular basis at the station. Nancy is able to operate the station on her own and is very knowledgeable as well. I visited for a second time today, recorded data on a spreadsheet and helped take down the nets when it started raining. I was dismally uncoordinated with the nets and was challenged with removing the dried leaves which had blown in. I am definitely not ready to take down captured birds. Both days I was able to handle and release a number of birds which was a real pleasure. 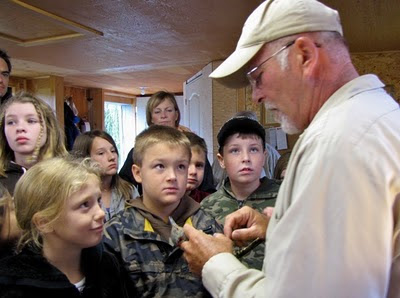 Students are introduced to a Northern Flicker


A busload of elementary school children arrived and there were enough birds caught that each child could hold and release one bird. I do love children of this age group and they were most interested in the variety of birds and the banding process. Rick is a natural educator and was very patient with the groups. The morning went by very quickly. In the end, 84 birds were banded and 21 birds were re-trapped with a total of 105 birds handled. Rick has a list of the species captured today here.
I am organizing the bird pictures I did take and will post more this week. I have some of my better pictures in this album on Flickr.
Posted by Ruth at 9:11 pm