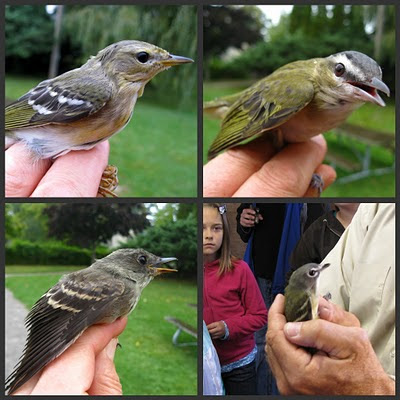 
It is often difficult to identify a bird seen briefly in a leafy bush or treetop. This is especially true in the fall when many adult birds are molting and juveniles are seen in greater numbers. The set of pictures above shows four birds with similar colouring, but when seen up close, their differences are apparent. I am not skilled enough to differentiate many fall birds and I can name these only because I took notes at the banding station. 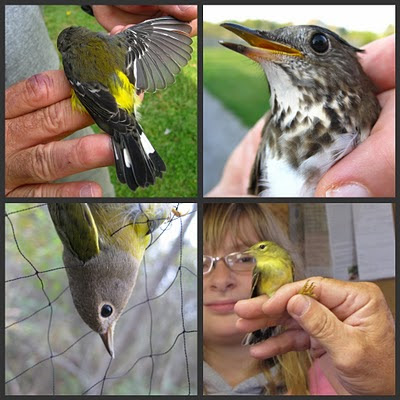 Other birds were more distinctive but are not commonly seen due to their secretive nature. Once again, these birds were new to me but they are appearing regularly at Ruthven Park during fall migration. They are also hiding in my region which is just an hour or so to the north. 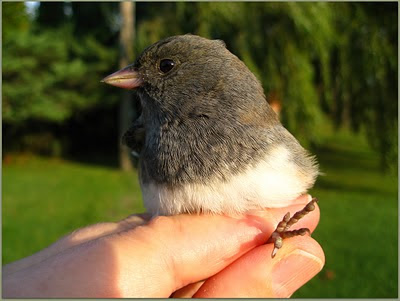 It was nice to hold an unmistakeably familiar bird in my hand and this Slate-coloured Junco was calm and poised as I took its picture. They are just starting to arrive for their winter stay and will be at our feeders until spring. 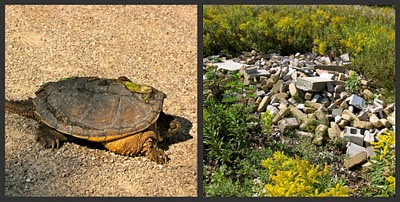 I saw a fairly small snapping turtle near the river. Ruthven Park also had a hibernaculum which is a large pit, 3 metres deep, which extends below the frost line. It is filled with discarded construction concrete and is designed to attract snakes during the winter. I actually tiptoed up to the edge of it sincerely hoping there were no snakes lolling around.

Much as I enjoy my job, I would prefer to spend September and October volunteering at this banding station. Fall really is my favourite time of year and spending each morning outdoors would be very appealing, especially when there is so much to see and learn.

A total of 33 different species were banded.
Posted by Ruth at 7:50 am