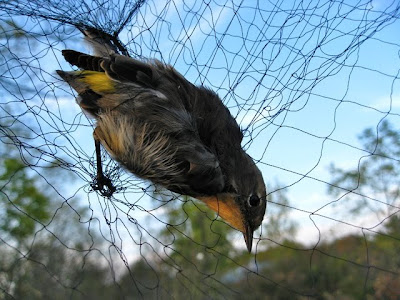 
The closest bird banding station is 90 minutes south of us and the nets go up in predawn darkness. In April and May, it means arriving very early but during fall migration, dawn arrives around 7 AM rather than 5:30 AM. If the weather is very rainy or windy, banding is off, so setting a date in advance for a visit can be tricky. I have been checking the long term weather forecasts, which seem to be about 50% accurate three or four days ahead of time, and made a decision to visit the station yesterday. 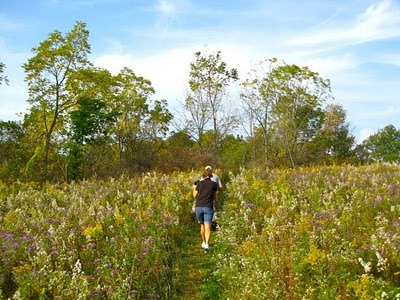 Part of the "net route"


It was muggy and hot, close to 30C, which is not typical late September weather. The winds were relatively calm early on but a cold front approached by mid-morning bringing strong, gusty winds. The nets had a few interesting birds the first couple of times we checked them, but by the third and fourth round, they contained more leaves than birds. This was good for me because the master bander, Rick Ludkin, had time to explain things and I had more time to look at the birds which were captured, examined and released. On a busy day he told me there is no time for chit-chat. 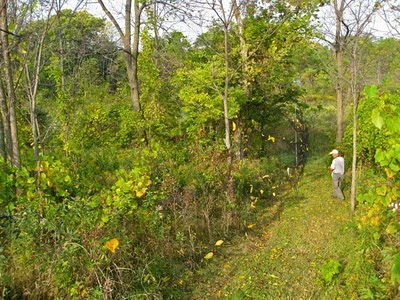 Rick checks the nets for birds but finds many leaves instead

Highway 54 is a scenic route which follows the Grand River’s banks closely and as I travelled north in the afternoon, I came across a recovery operation at the scene of the crash of a small plane in the river. I felt sick as I watched the rafts in the river and saw the underside of the submerged airplane in the water. The plane had crashed shortly after take off when one of the strong wind gusts caused a down draft. It seemed a sad ending to my perfect morning. 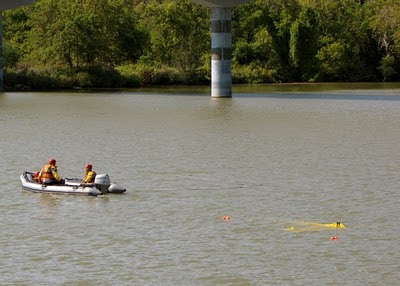 
But...listening to the news a few hours later, I learned that the pilot and his passenger were rescued unharmed in the river and the recovery operation I witnessed was to locate pieces of the airplane.

Winds can buffet and hinder, or they can be favourable and push in the right direction. Winds hindered airborne operations today for birds and planes but all was not lost. I will share some pictures from the bird banding station in the next few days.
Posted by Ruth at 7:53 am