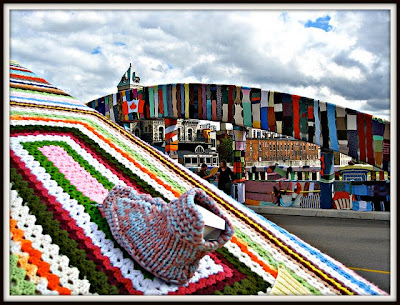 I never heard of yarn bombing or guerilla knitting until this summer when odd pieces of knitting appeared on lamp posts and fences in our city. There is a blog from western Canada called Yarn Bombing and the authors recently published a book on the topic. It is a world wide phenomena and the blog shows some pretty unusual and sometimes amusing pieces of yarn art. 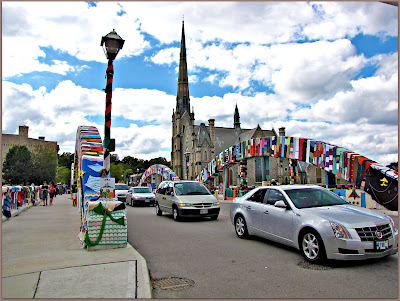 The textile industry was very important to the City of Cambridge in years gone by. The textile factories are now closed but fibre artist Sue Sturdy came up with the idea of commemorating this history by covering one of the bridges which crosses the Grand River with knitting. Knitters from the region have contributed to the project over the past several months. I don't know who did the final fitting, but the finished project in "grand" in scale. All four arches of the bridge as well as all the posts are completely covered in knitting. The work will be dismantled at the end of the month and the pieces are going to be stitched together to create blankets and scarves for needy people. 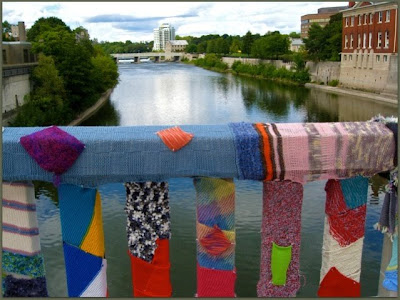 If I was inclined to do any knitting, it would not be for a bridge or lamp post. But I saw several proud contributors having their photos taken while standing next to their bridge work. Young girls to great-grandmothers (and maybe some men) took part in this community project.

Ruthie J of Nature Knitter identifies herself as a knitting addict. Her work is not found on a bridge or parking meter, but is available for very reasonable prices on Etsy. I have ordered a few items for gifts and I know she is a very reliable seller. She has shared some patterns with me, but knitting is not a relaxing past time for me at this stage in my life. So I will be content to wear something of Ruthie's and to admire the colourful bridge for a couple of weeks. And who knows where the next yarn bomb will be?

(I posted a few more pictures of the bridge on my other blog.)
Posted by Ruth at 10:24 pm