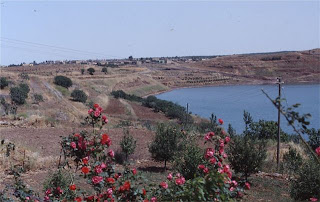 I travelled to Israel during the month of May in 1977. Our tour bus broke down one day near the Druze town of Birket Ram in the Golan Heights. This potentially unfortunate incident turned out to be the best day of the trip as we had several unscheduled hours to explore the area around the crater lake and to meet with the very friendly local people. Wild roses and poppies were in flower and these beautiful young girls were out in the fields gathering some of the scarlet blooms. 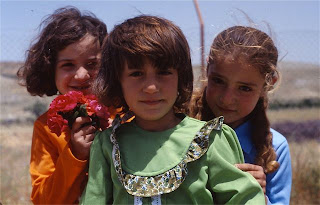 The Druze people follow a distinct religion, influenced by Islam and the teachings of Greek philosophers. They do not consider themselves to be Muslims as they are not followers of the prophet Mohammed. In Israel, these Arabic speaking people are considered to be loyal and patriotic and they serve in the Israeli army. 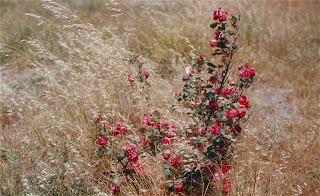 An Arabic legend begins by telling us all roses were originally white.

One night the nightingale met a beautiful white rose
and fell in love.
At this time nightingales were not known for their melodious song
and they croaked and chirped like any common bird.
The nightingale's love for the rose was so intense that
he was inspired to sing for the first time.
Eventually his love was such that he pressed himself to the flower
and the thorns pierced his heart,
colouring the rose red forever.
Millions of cut red roses were sold this Valentine's week. I prefer the beauty of an unexpected rose in bloom such as I enjoyed this day.
Posted by Ruth at 6:21 am