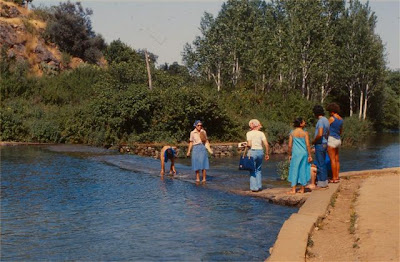 I have been scanning slides today from trips taken twenty to thirty years ago and have had a good time reminiscing about my experiences. In 1977, I attended the World Congress of Physiotherapy in Tel Aviv, and spent two weeks in the country. Our group did a lot of sightseeing and while there were plenty of security checks, the political scene was less volatile that it is there today.

I am standing in the at the base of located in the north east region of the country. Much earlier that day we had departed the hot, parched desert of the area and had driven north along the and the to Caesarea Philippi. The is one source of the . After a long, hot journey it was refreshing to stand in its cold, spring-fed waters. The vegetation was lush and green, migrating birds flew in large flocks above us, and stands of conifers stood in contrast to the desert we had left behind.

The picture reminded me of the verse in Proverbs 11:25 which says,

“The generous man will be prosperous,
And he who waters will himself be watered.”

The water that flowed over my feet gathered with other streams to create a system that irrigated much of the . As long as the current moved, the water gave life and energy to man, animals and vegetation. Once it reached the , it stopped flowing and reached a salination level that caused death for most organisms.

We are often encouraged to spend excessive time and money on our own personal needs and pleasures. We may contribute a small amount to a charitable cause from time to time, but this is seldom the first thing we do with our assets. While self care is important, life is most fulfilling when we give freely to others.

I visited with an elderly man recently and listened to him tell stories of his past. As I left he said, “Thank you for listening to me. Some people come to visit and they don’t pay attention to what I am saying. They keep interrupting me to talk about their lives.”

Wow! I realized that I have often been guilty of distraction and inattention too.

This week I am going to try to be more generous in watering others, with my time and attention, my money, my praise and encouragement. Even if others do not acknowledge my efforts, I will surely be rewarded.