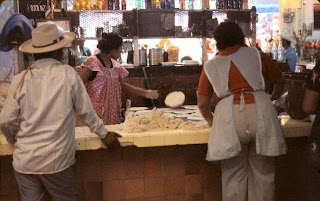 Earlier this month, there were demonstrations in the streets of Mexico City to protest the rising cost of corn. The price of maize on world markets has escalated and the price of corn tortillas has almost doubled in Mexico. Every day, 104 million Mexicans consume over 300 million tortillas. It is truly a food staple and many people in the poorer parts of the country have little else to eat.

I remember my mother describing a weekend visit she made to a tiny community in the mountains. She told me the people ate beans and tortillas for breakfast, and tortillas and beans for comida. The tortilla, also a plate and food utensil, is served at virtually every meal. Each community has a local tortillaria like the one above where you go to buy fresh tortillas for your meal. The larger cities now have large supermarkets and fresh, hot tortillas are sold by the kilogram there as well.

Mexico does grow enough corn for its population, but large quantities of the grain are used for chicken and animal feed. The growing demand for ethanol as an alternative fuel has driven world prices for corn upwards and speculators are being accused of hoarding grain in response to this. Rising oil prices increase the demand for corn to make environmentally-friendly biofuels in North America. And there are political overtones as the new government of President Calderon is criticized for the party's economic policies. 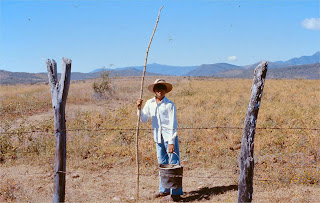 The poor in Mexico eat an average of 14 ounces of tortillas daily, giving them 40 percent of their protein. With the new prices, minimum wage workers could spend a third of their earnings on tortillas for their family. It seems that a profit and energy hungry world is further marginalizing its poorest citizens. To me, paying a dollar and a half for a kilogram of tortillas in Mexico is a bargain. But, I cannot imagine the hardship of living on four dollars a day.

When I visit Mexico, I enjoy fresh corn tortillas as often as possible. There is no equivalent available in the north and the frozen ones I get at a local Central American market seem stale and tough in comparison. I have purchased masa flour and tried to make my own at home, but they were dry and disgusting.

Our high energy demands and meat centred diets have a direct effect on the main food source of many cultures in the world who rely on corn as a staple. Like many environmental and social issues, the problem and the solutions are complex. My awareness of issues like these should increase my motivation to conserve energy and to choose meatless meals more often. In our culture of wealth and plenty it is so difficult to remember the less fortunate. 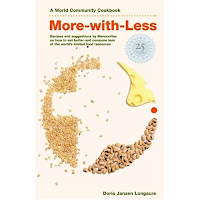 For further reading:
I bought this book when it was first published in the 1970s. The information is still relevant almost 30 years later.
More-with-Less Cookbook
Doris Janzen Longacre