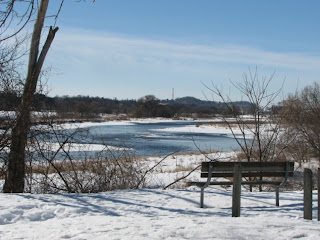 We are fortunate to have many kilometers of groomed trails in our region, within the cities and also in the rural areas. I purchased two books, Grand River Country Trails 1 and 2, by Katherine Jacob and decided to explore as many of them as possible this year.
Today was beautiful and sunny and even with an air temperature of -10C, it was perfect for a winter hike. My husband and I picked a trail that is actually within the city limits, only 5 km in return distance, and without any steep or rocky sections.
Perfect!
The guide book said there had been over 200 birds identified in the vicinity, as well as a diversity of other wildlife. 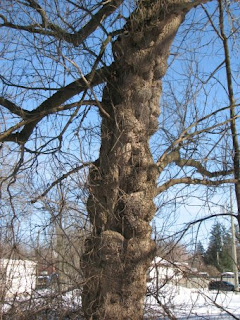 There is a confluence of two main rivers at this location and many water and shore birds are found along the flood plain and marshes. The trees along the higher banks are home to many other birds. This interesting burled tree was near the trail entrance. We spoke with one lady who spotted a pair of bald eagles in a stand of split willows early this morning. She said the eagles are most likely to be seen in the morning and evening. (note to self) 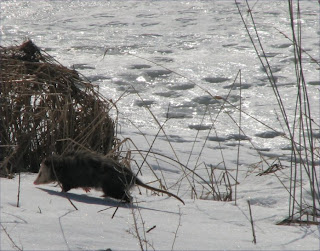 There were ducks and geese on the open water, mostly mallards and Canada geese. A few pair of common mergansers were also seen, but my photos of them are rather fuzzy. An opossum came out from under a fallen log and meandered along the shore. Opossum have migrated up gradually from the south over the past century and are now fairly common in south western Ontario. 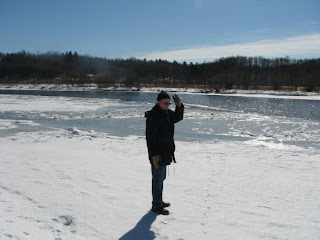 In spite of the cold air temperature, the river ice is thinning. My husband walked out to get a better look at the pair of muskrats we saw diving from the edge of the ice. An avid fisherman, he wanted to see what type of minnow they were catching. He made me feel anxious and I warned him that I had no intention of rescuing him if the ice gave way. 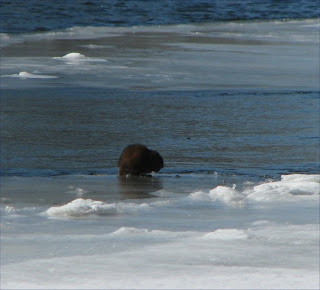 I counted ten different bird species today and have decided to keep a list for this particular trail. Our migrating birds should be appearing in the next few weeks and they will be easier to spot before the leaves come out on the trees around the first of May.
If I am lucky, I will see those eagles too!
Posted by Ruth at 7:08 pm