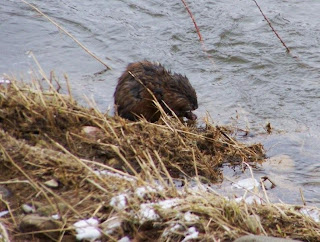 The trail we walked this past weekend included several areas of natural and historical interest. The entire length of the RIM Park Trail is a paved, two lane path which made the springtime walk a lot less muddy. Hikers and cyclists are asked to stay on the trail as not to disturb the wild life living in sensitive areas near the adjacent ponds, marshes and river banks.

I admire how people like Bev, of Burning Silo are able to interpret animal signs in the wild. I have asked her questions and she recently wrote this post which describes things to look for when searching for caterpillars. The post she wrote on porcupines was just as interesting.
This week, I found a book at our local library called Tracking and the Art of Seeing by Paul Rezendes. It is full of colour pictures and the text is not too difficult for an amateur nature sleuth. I would recommend it without hesitation as he describes the signs of many familiar animals and birds in a very interesting way.

My husband has spent a lot of time outdoors over the years while pursuing his favourite hobby, fishing. He does not go on a lot of walks with me, but can surprise me with his good observation skills. He is the first to see a new bird or track, even though he just has a passing interest in anything that will not grab his fishing line. 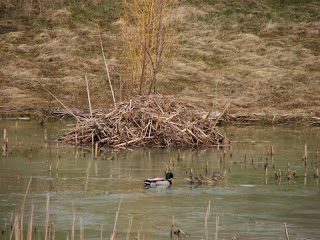 As we walked by a pond near the large sports complex, he noticed two structures made from bulrushes and other plant material. Rezendes writes:

Muskrat construct lodges that are every bit as complex as beaver lodges. Construction can begin in August and go on until late October. The muskrat begins with a large platform made of mud piled with small aquatic plants...sticks and leaves, all mixed with more mud. When the pile is about two feet high, the muskrat excavates it from the inside, hollowing it out until a chamber large enough to house a family is formed. 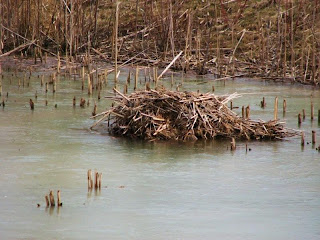 He also describes a muskrat feeding station. These are built in a similar fashion but are smaller than the lodges. They provide a safe place for the muskrat to forage for food away from the lodge. Muskrat are mainly herbivores, but will eat things like clams, fish, snails and mussels. The muskrat at the top of the post was photographed by my father as it ate plants at the edge of the Grand River. 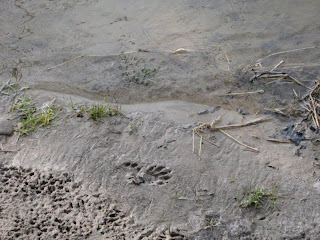 These tracks were left in the soft mud at the edge of the river. I cannot say with certainty that they are from a muskrat, but I would say it would be a good guess. I would have to ask why there are just one set of prints present.
Seeing birds and animals is pleasurable, but learning to interpret their sounds, habits and trails can be even more interesting and rewarding.

Winterwoman at A Passion for Nature has sent me a link to a photo of muskrat scat. The book I mentioned has plenty of scat photos as well.
Posted by Ruth at 6:32 am