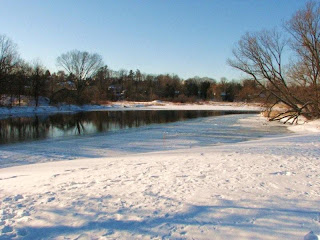 Today we "celebrate" a new Ontario statutory holiday called Family Day, a "gift" from our current provincial premier, Dalton McGuinty. There has been plenty of controversy about the new public holiday. Some workplaces have removed the Civic Holiday Monday at the beginning of August (which is not mandatory) to make way for today's work holiday. Most people would rather have a day off in the summer rather than on a bleak, stormy late winter weekend. Unless you are a skier, there is not a lot to do as even the malls are closed. We had freezing rain and rain yesterday and walking remains treacherous. So for many of us this is a day for household chores and other mundane tasks.

Saturday was sunny and beautiful and my husband and I walked about 5 km along the river. I wanted him to see the eagles, but none were about. We did see the usual winter ducks and birds like chickadees, tree sparrows, juncos and cardinals. The Grand River is open in the region unlike last year when this area was completely frozen. Even the shallow section near the hospital is running fast. Winter did not arrive until mid-January in 2007, but it was cold when it came. This winter has been marked by many storms, but each week we get a day or two with temperatures above freezing. These fluctuations have kept water levels high and the river free of ice midstream. The muskrats and opussums we watched frequently last year are not around in their usual places either. I wonder if the big thaw disrupted their winter homes as the river flooded in January. But there are signs of creatures around the river. 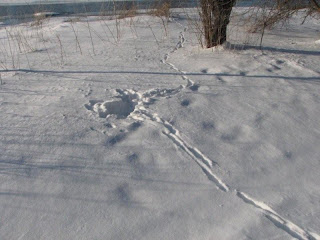 This set of prints really intrigued us. Something came out of the river, rested on its side, got up again and proceeded into the bush. I don't think it was a dog, as we would have seen tracks too and from the river. The snow is deep, so it is difficult to see the footprints of heavier animals. 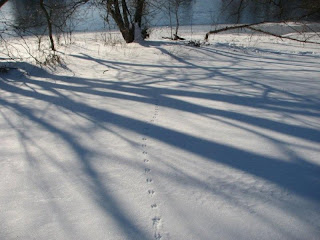 This lightweight creature left little tracks going down to the river. Overall, things were pretty quiet though. One of the members of our local birding forum wrote yesterday, "I think the only reason that it's so quiet in there is because it's winter, and the native food supply is running low. Any bird that is able has probably moved to hang out at somebody's feeder!" 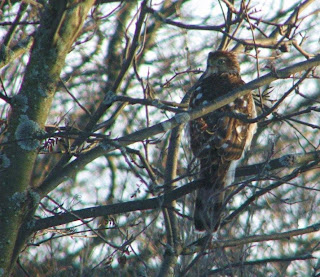 How true! When we pulled into our driveway in the late afternoon this immature Coopers (or Sharp-shinned) Hawk was sitting in our backyard with a view of our feeders. I have seen this bird swooping by a few times, but have never seen it up close. Unlike the hawk in Jayne's yard, this one had not made a kill. Needless to say, there were no little birds or squirrels at the feeders.
I am cooking some venison right now, a gift from a friend who had a successful fall hunting trip. If it turns out well, I will post the recipe on my recipe blog. It does smell good! My dinner will be far more accessible than dinner will be for this hungry raptor!