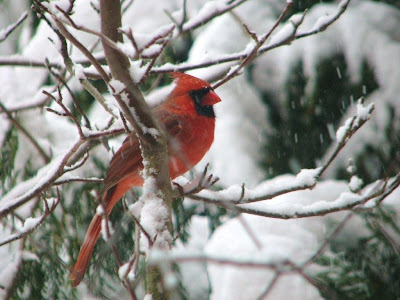 The storm we received yesterday was a bad as promised for those who had to drive on the roads or do any shovelling. We didn't finish off with freezing rain, but received 20 cm of wet, heavy snow. Schools and universities were closed, but the hospital had to be staffed, no matter how bad the conditions were. I got stuck three times on the way home and had to back up and try other routes to our street but was thankful to arrive to light and warmth indoors.

As I looked out the windows at the hospital feeders, the sight was very lovely, with fresh snow on the trees and plenty of bird activity. The feeders have never been so busy and the usually skittish and difficult to photograph Northern Cardinal posed several times for me. The White-breasted Nuthatch below also showed its best colours.

Today is Groundhog Day. Check out Winterwoman's post for a bit of history about this midwinter celebration. I didn't know that February 2nd is half way between winter solstice and the vernal equinox. Wiarton is a small community on the Bruce Peninsula in Ontario. Wiarton Willie is its most famous resident and this pampered groundhog did not see his shadow today indicating an early spring is on the way. Never mind that Willie has only been accurate in his predictions 37% of the time. Pennsylvania's groundhog, Punxsutawney Phil did see his shadow and this indicates six more weeks of winter.

Mardi Gras is this Tuesday and Lent starts on Wednesday marking the start of the Easter season which comes early this year. The next six weeks will belong to winter, but spring will strengthen and tease us with increasing sunlight and warmth. Six weeks is not forever! 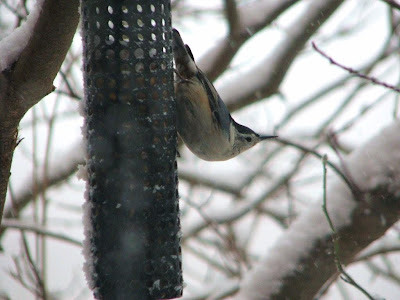