Ice Jam on the River 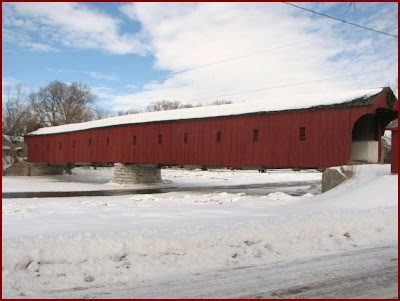 The river runs free below the bridge

On our way to look for the Snowy Owls last weekend, we drove through the hamlet of West Montrose on the Grand River. Ontario's only covered bridge spans the river here and the area draws many tourists, especially as it is in the heart of Old Order Mennonite territory. There is an ice jam above the bridge that has caused some anxiety for home owners on the flood plain as the river has overflowed its banks almost to the road.

I have mentioned before that last year the river froze over quickly once winter came and it stayed that way until the ice broke up in March. This year we have had weekly variations in temperature, from very cold to above freezing every few days. The rivers are flowing higher and faster than usual. Our local newspaper described it this way. 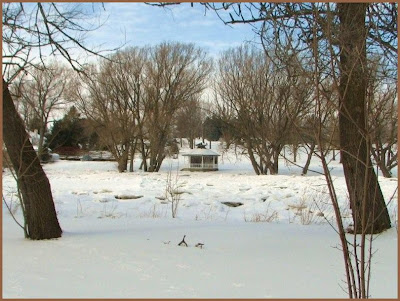 Ice jam above the bridge

" ...conditions are ripe for the development of more ice that could add to a jam already blocking about 80 per cent of the river channel. Cold, flowing water and winds can combine to form what's called frazzle ice, which has a sticky consistency like porridge. The water is cold enough to freeze, but it's moving too quickly to form a sheet of ice."

There are some dams upstream that are being adjusted to decrease the flow of the water to this area. Tonight the temperatures are dropping below -20C, a snowstorm is forecast for Friday, and we may have rain later on the weekend. This brings another dangerous cycle of weather for those watching the ice.

On another note...this freeze/thaw winter has also caused an enormous "pot hole" problem on our roads. A driver has to watch the traffic and the roadway as the big, rim-crunching holes create an obstacle course. Ice is a powerful force in nature, and these small examples show how the large glaciers of the ice age had the ability to sculpt our landscape many years ago.
Posted by Ruth at 7:04 pm