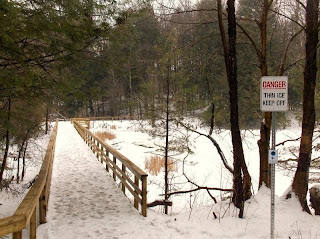 It has been a week since I was able to go for a good outdoor walk. The weather has been stormy and the last two days have been bitterly cold. The dog usually likes to sit our on the deck for a while when he goes out, but his trips to the backyard are completed hastily right now.

The bird feeders have been busy. On the weekend, a Downy Woodpecker sat huddled on the deck. The suet basket had been downed by the squirrels (when do they hibernate??) and the woodpecker was wondering where his food had gone. He barely moved as I retrieved the suet and hung it back up again.

When I walked in the Huron Natural Area last week, there were few other people about and it was eerily quiet. Other than a few crows, I saw no birds or other wildlife. The beaver pond was covered with slushy ice and a sign warned people to keep off the surface. Around the beaver lodge the water was open as the water rushed under the bridge and the creek continued free of the barrier of logs that had slowed its flow. 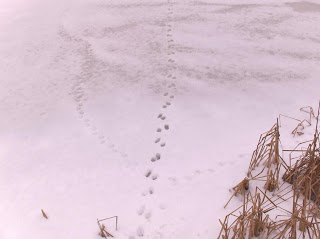 On the ice surface, sets of track were seen, left by invisible creatures who could not read signs. I recognize a few animal and bird tracks now, but these were unfamiliar. 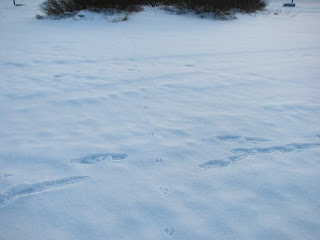 In another area, a set of small tracks appeared from nowhere and ended suddenly. My large Yaktrak covered boot prints go from right to left and the small prints go from the bottom of the picture upwards. (click photo to enlarge) 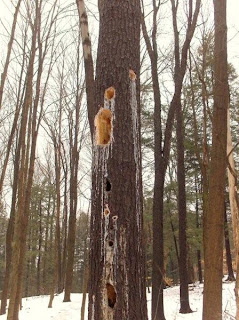 All winter I have been looking for different woodpeckers. Downy and Hairy Woodpeckers are very commonplace but Red-bellied, Red-headed and Pileated Woodpeckers are far more elusive. They have been seen occasionally by other local birders. I came across this tree, running with sap and freshly excavated. What a large set of holes! I would guess that a Pileated Woodpecker did the carving. I stood quietly for quite a while, listening and watching, but all was silent. This particular nature area has not been good for bird watching. I find the river trails far more productive. However, there were signs of life, of birds and mammals hiding and watching me play hide and seek with them.

This trail will be accessible only with skis or snowshoes after our recent snows, but because of some steep and icy sections, I will not be back for a while. Life is hard for the residents of this bush at this time of winter and finding food or conserving energy is a full day's work. The Indians called February's full moon the "Full Hunger Moon" and it spoke of the lack of food for humans and animals alike. The next full moon is on February 20th and then we begin the journey to the "Full Sap Moon" as the sun's warmth is felt by the trees and winter starts its retreat.
Posted by Ruth at 8:04 am