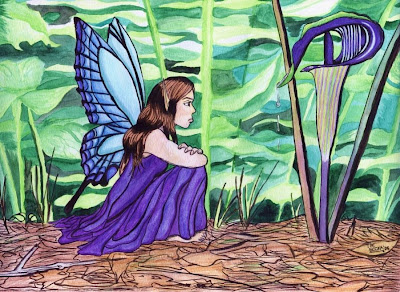 Original water colour and ink painting by The Becka
My youngest daughter, The Becka, painted this whimsical picture for my birthday. She remembered the post I did last May called Friday Flowers: Fairy Bells and knew I was pining for spring. So she came up with this lovely fairy sitting in front of a Jack in the Pulpit. But you must notice that this fairy has a bit of an attitude. Becka called it "Boredom" just to purposely annoy me (in her own words) because she knows I always told our girls there is no such thing as boredom. In fact, if they ever said the "B" word, they were immediately engaged in some activity of my choosing, most likely a household chore. The fairy bears a striking resemblance to The Becka even though she strongly denies it is a self portrait.