This winter has been a roller coaster ride of weather systems. Each week in the past month we have had a good snowfall, a day or two of rain and fog, then a flash freeze as temperatures plummet again bringing yet another snowstorm. The sun may peek through for a couple of hours a week at best. Today is a day of freezing drizzle, rain, heavy fog and black ice as temperatures hover around the freezing mark. And we are under a winter storm watch.

I say this to explain that winter trail walking has been very difficult with not enough good quality snow for snowshoeing, and treacherously icy conditions and muddy, flooded trails on other days. I have managed to get out a few times though. 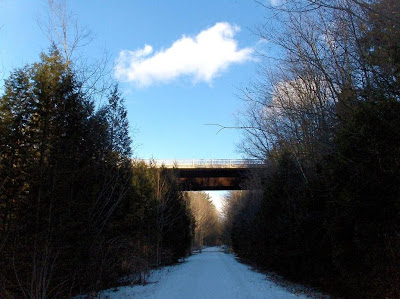 "It was opened in 1994 and was one of the first Ontario abandoned rail lines to be converted to recreational trail use. The Lake Erie and Northern Railway was one of the last electric railways to be built in Ontario. The electric cars were similar to streetcars, although running along their own right of way and hauling both freight and passengers between urban communities."

I found the section of trail I walked near Glen Morris to be well groomed and easy to walk with lovely views of the river. A mature Bald Eagle soared right above my head and Chickadees, Nuthatches, Downy Woodpeckers and other common winter birds were seen in some sheltered areas. I am always hopeful of finding some less common woodpeckers or owls, but have not been successful yet. 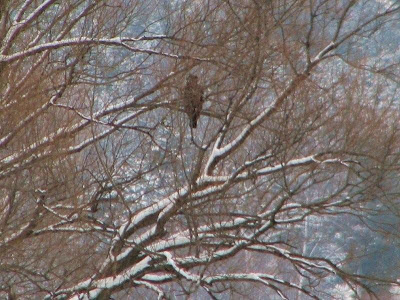 The Becka and I took the dog along the Linear Trail near our home on the weekend. The snow was deep and soggy and sheets of ice were beneath the surface. There are usually many ducks here at the confluence of the Grand and Speed Rivers but the river was very quiet in the early afternoon. We then saw two juvenile Bald Eagles patrolling the waterway. My camera was not ready, but we had a close view of one above our heads. For such a large bird, they can blend into the branches of the leafless willow trees very effectively. 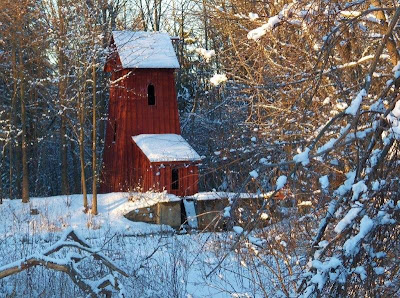 I have written about the Sheave Tower in Blair ON a couple of times and have featured pictures of it in the summer and fall. Here it is in the wintertime near the place where the Blair Creek empties into the Grand River. The trails around here are very accessible for a short walk and the scenery is lovely after a fresh snowfall.

For now, I am reading trail guides and making plans to visit some familiar and new places once the weather improves.
Posted by Ruth at 10:49 am