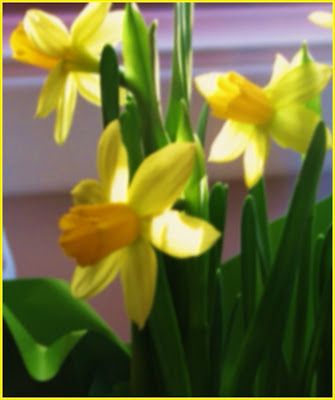 I WANDERED LONELY AS A CLOUD


I wandered lonely as a cloud:
That floats on high over vales and hills,
When all at once I saw a crowd,
A host of golden daffodils;
Beside the lake, beneath the trees,
Fluttering and dancing in the breeze.

Continuous as the stars that shine
and twinkle on the Milky Way,
They stretched in never-ending line
along the margin of a bay:
Ten thousand saw I at a glance,
tossing their heads in sprightly dance.

The waves beside them danced; but they
Out-did the sparkling waves in glee:
A poet could not but be gay
in such a jocund company:
I gazed - and gazed - but little thought
what wealth the show to me had brought:

For oft, when on my couch I lie
In vacant or in pensive mood,
They flash upon that inward eye
Which is the bliss of solitude;
And then my heart with pleasure fills,
And dances with the daffodils. 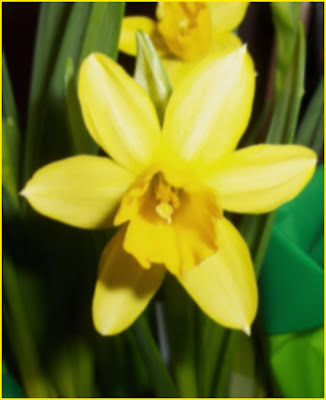 I memorized this classic poem somewhere between 5th and 7th grade, "back in the day" when all students had to recite two hundred lines of poetry each year. I still enjoy the cadence and descriptive words used by the poet and may find myself reciting it in old age when my long term memory is all I have left. The poem has been parodied many times. Agatha Christie's character, Hercule Poirot mocks it in the story Dumb Witness. He accuses the poet of being very depressed and wonders why he didn't write about women or good food. This limerick made me laugh.

I Wandered Lonely As A Cloud

There once was a poet named Will
Who tramped his way over a hill
And was speechless for hours
Over some stupid flowers
This was years before TV, but still.
(Famous poems rewritten as limericks)
Tomorrow is St. David's Day, a Welsh celebration that features daffodils prominently. I wrote about it last year in one of my first Friday Flowers posts. (link)

Happy Leap Day and a Jonquil Weekend to all!