Bird Parents and Me 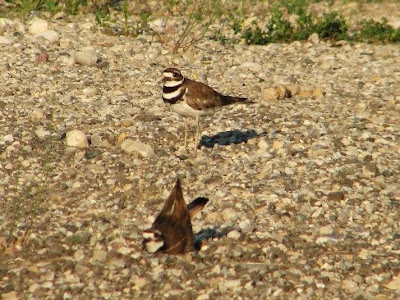 I know you are faking!

On Saturday evening my husband and I walked at Snyder's Flats where ponds and meadows as well as the river attract interesting birds and wildlife. On the way back to the vehicle a couple of noisy Kildeer did the broken wing performance as they attempted to divert our attention from something. I wasn't expecting them to have a nest so close to the roadway and really couldn't see much because of the bright setting sun. After we were in the truck, we noticed three birds together. There, "hidden" behind a clump of grass, was a juvenile Kildeer who was at least as big as its parents. It amused me to think that this large youngster was still so closely guarded by the adults who obviously still cared for it. I am sure it still has some life lessons to learn this season. 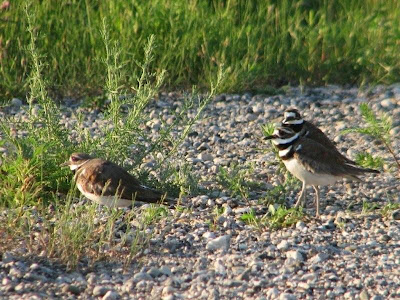 Juvenile Kildeer on the left

Our daughter is returning to Mexico today where she plans to continue to live and work. As her mother, I would love to do a broken wing routine and keep her close to home. Her father and sisters feel the same way and we are sad to see her six week visit come to an end. She left the nest a couple of years ago and has been under our surveillance from a distance, so to speak. But like this young Kildeer who has been exploring away from its birthplace, she must learn to defend and care for herself without her parents around. 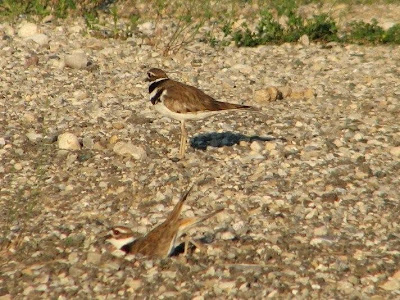 Is that me in the foreground?

Isn't it funny how nature teaches us more about ourselves?
Posted by Ruth at 12:04 am