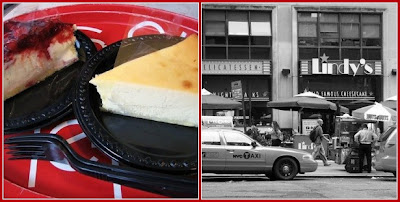 Believe it or not, I have more to write about New York City. This topic is of utmost importance to any tourist, particularly a tourist who may be walking ten miles a day in Manhattan. Many landmarks in NYC have been featured in films and documentaries, including famous eateries. What foods do you think of when someone mentions this city? The Becka and I decided we had to try New York cheesecake and New York bagels. In Guys and Dolls, Mindy's cheesecake is the object of an attempted wager. We walked by a place called Lindy's, but ended up buying our cheesecake around the corner at a deli with an outdoor patio. It was worth every fat-filled, creamy calorie! 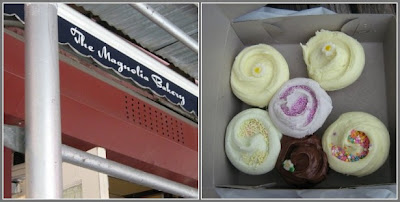 My other daughters had been told by friends to visit The Magnolia Bakery in Greenwich Village to try their delicious cupcakes. There is always a lineup at this place for their desserts which are really just basic recipes that were served at homes and church suppers in the 1950s and 60s. The cupcakes are made with a few ordinary ingredients including lots of real butter. I thought the icing was way too thick, but it was tasty. We tried their cupcake recipe at home and they turned out perfectly. I have posted the recipe here. (We only used half the icing recipe.) 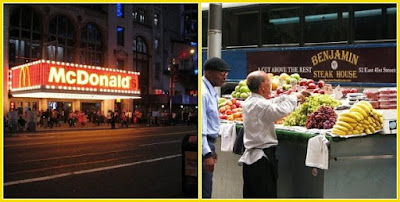 We only passed a couple of McDonald's restaurants in Manhattan. But it was hard not to associate Morgan Spurlock's documentary Supersize Me with these golden arches. It was better to choose some fresh fruit from an outdoor vendor on the next corner! There was a grocery store near our hotel but the food was very expensive. The produce outside was about half the price. 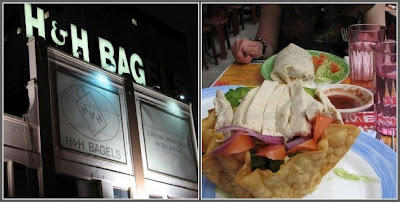 Bagels are unsweetened donuts with rigor mortis according to a classic definition from the New York Times (1960). We bought bagels at the nearby H&H Bagel plant at 46th Street and 12th Avenue near the Hudson River docks. This company is mentioned in the movie You've Got Mail. They were tasty but I was hoping to find some more authentic bagels which are chewier and smaller. Our hotel had a fridge and microwave and we only went out for one meal a day. We ate all but one restaurant meal outdoors watching the people and traffic passing by as we rested our tired feet.

There are people who go to New York to visit fancy restaurants and clubs. I would rather save my money for something more lasting than an expensive meal. I was sorry that we did not have time to explore Little Italy or Chinatown where inexpensive but unique restaurants are found. I was impressed by the number of authentic looking ethnic foods that were available. Trying something new is always on the menu for me.
Posted by Ruth at 6:30 am