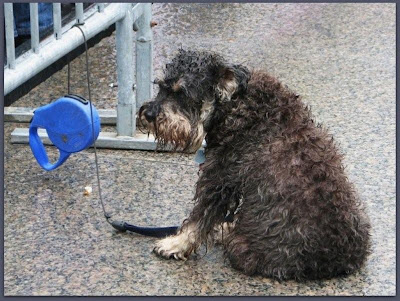 I have the blues...waiting in the rain for my master
Blue is my blog theme for the second full week of August. Language is such an interesting study. Blue seems like such a basic word but its meaning stretches from colour to emotion to music style to political stance. I speak only English but imagine the word has nuances in other languages as well.

I will have to work on my personal colour challenge and see what comes up in the next few days...

BLUE
Noun
1. The hue of that portion of the visible spectrum lying between green and indigo, evoked in the human observer by radiant energy with wavelengths of approximately 420 to 490 nanometers; any of a group of colors that may vary in lightness and saturation, whose hue is that of a clear daytime sky; one of the additive or light primaries; one of the psychological primary hues.

2. the colour of a clear unclouded sky
3. anything blue, such as blue clothing or blue paint: she is clothed in blue 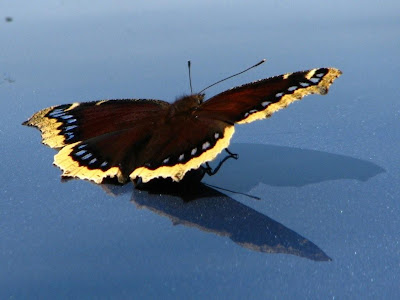 ...the Mourning Cloak butterfly rests on a blue car
(with a name like that I wonder if it has the blues too!
4. a sportsman who represents or has represented Oxford or Cambridge University
5. Brit informal a Tory
5. out of the blue unexpectedly
Adjective
[bluer, bluest]
1. of the colour blue; of the colour of a clear unclouded sky
2. (of the flesh) having a purple tinge from cold
3. depressed or unhappy


Noun, pl
the blues
1. a feeling of depression or deep unhappiness
2. a type of folk song originating among Black Americans 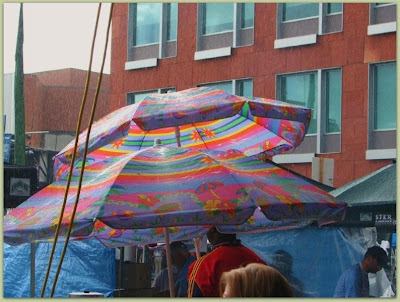 Shades of blue...sun umbrellas for the rain
Posted by Ruth at 9:00 am