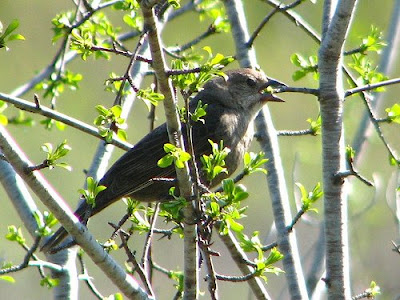 We are born with an innate sense of fairness and as children perceive unfairness very strongly. There were five children in our family and Mom had to cut a pie into seven very even pieces. Complaints were sure to be voiced if one of us felt we were short-changed by even a sliver of dessert.

Somewhere along the way we learn that life is not dished out in fair, even slices and are much happier if we accept this fact. We are acquainted with immature people who have difficulty with hard things that come their way. No one is guaranteed an easy life and our struggles should make us stronger, more resilient and empathetic. 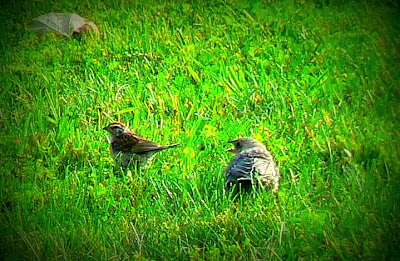 I am not a fan of Cowbirds and had to look hard in my archives to find a picture of one. I took the picture of the female Cowbird this spring thinking it was a different bird. This native bird is a parasite and lays its eggs in the nest of other birds, often those of small warblers and sparrows. The Cowbird chick is large and demanding and may crowd out the host bird's own babies.

How unfair is that?!
Recently I was out birding with a friend from work when we came across a little Chipping Sparrow who was working furiously to feed a very loud and demanding juvenile Cowbird. The youngster was much larger than the surrogate parent. The Cowbird sat in the grass as the sparrow flew up, down, left and right catching insects which it placed in the Cowbird's beak. I approached to get a closer shot and the Cowbird flew most capably to the top of a nearby tree.
What a lazy adolescent! 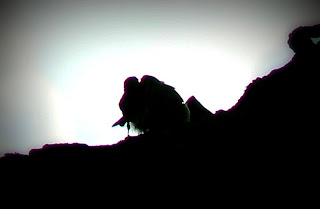 The Chipping Sparrow demonstrated acceptance of its misfortune and cared for the demanding intruder capably. I was the one who felt indignant as I observed the unfairness of it all.

What can I learn from nature?
* photos taken by my friend, Deb
Posted by Ruth at 4:56 pm