My Corner of the Swamp 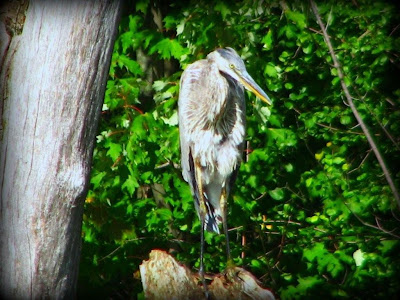 Great Blue Heron Glare
The swamp has an increasing number of birds now that fall migration is well under way. Various shorebirds are passing through and soon we will see ducks who have been breeding in the north stopping by for a rest on their way south for the winter. It is not unusual to see ten Great Blue Herons at one time. Last week a local birder reported seeing six juvenile Black-crowned Night Herons in the middle of the afternoon.

I detour past this area frequently and in just a few minutes always see something interesting or amusing. The Great Blue Herons are found in predictable areas and one familiar bird is found in the back corner every time I visit. It stands on a stump and displays postures that vary from intimidating to just plain silly. 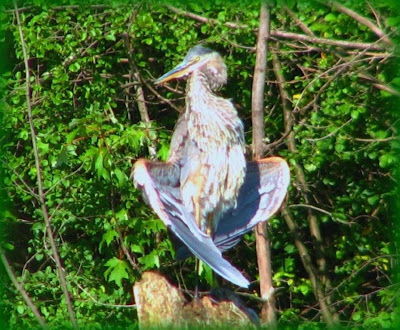 Does this pose scare you?

The Belted Kingfishers seem to have experienced a local population explosion. I watched the bird below try and grab a fish from the mouth of another female who was manipulating her catch to swallow it head first. The two birds sat on stumps opposite each other and would dive simultaneously in nearly the same spot, perhaps aiming for the same minnow. That would trigger a rapid pursuit across the surface of the water as they battled for the best fishing ground. 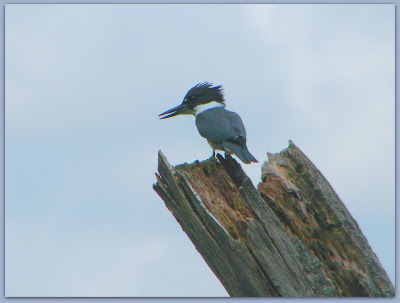 The Green Herons are less dramatic and can be hard to spot as they watch the water from the shore or a log. This one caught a White-tailed dragonfly and gulped it down but I was not fast enough to capture it with the camera. 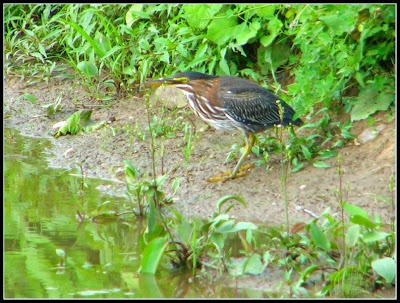 Most of these birds will have a long journey ahead in the next few weeks. A few Kingfishers do stay near open water on the river throughout the winter. They must compete to survive and the skills they are practicing in late summer may mean the difference between life and death before they breed again.
Posted by Ruth at 5:51 am