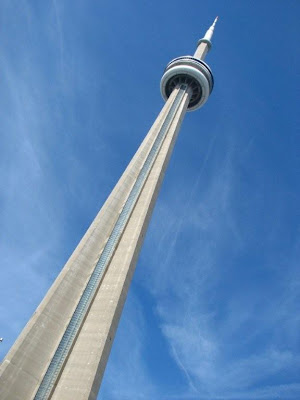 I lived in Toronto in the mid to late 1960s and became familiar with the layout of the city in those years. Much has changed since then and the skyline is much higher and the streets much busier. We spent a day in the downtown area last weekend and there was enough to see to keep three people with different interests happy.

We dropped The Becka off at the Metro Toronto Convention Centre where she attended Fan Expo 2008. She wrote about it in her blog. The CN tower is adjacent to the centre and I snapped a photo out the driver's window of the car. 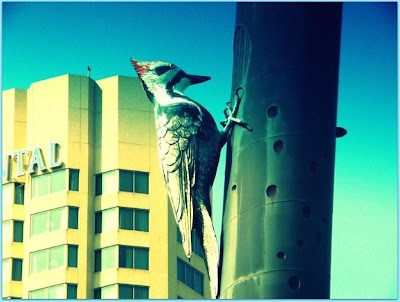 I have attended a number of conferences in this facility but have never been to the back entrance before. I was intrigued by a giant sculpture that consisted of a steel pipe cut off to look like a tree stump and two very large birds; a Pileated Woodpecker and a Yellow-bellied Sapsucker. 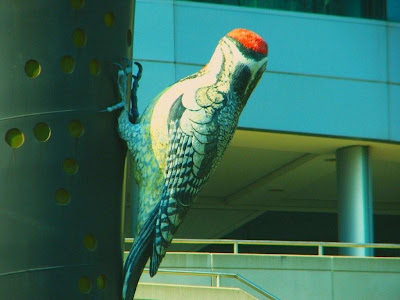 Dominating the south entrance to the Metro Toronto Convention Centre is Woodpecker Column by artists Dai Skuse and Kim Kozzi working collaboratively under the name Fastwürms. This 30-metre tall column rises from the concrete in unexpectedly stark but delightful contrast to the geometric regularity of the building, appearing to be pecked by a pileated woodpecker and yellow-bellied sapsucker. References to nature frequently occur in the art of Fastwürms and in this case it is specific to the site’s history as a swamp where waterlogged and decaying trees would have attracted indigenous woodpeckers."

I have bookmarked the Art Walk guide which features 22 outdoor sculptures in the downtown core. Most of them are more abstract or are people related. I thought this tribute to the natural history of the area was most interesting. 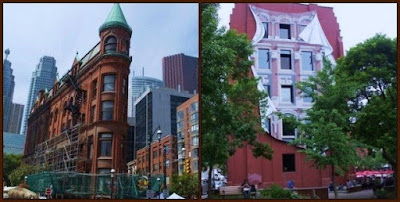 Front and back of the Flatiron Building

The Gooderham Building was erected in 1892. It is Toronto's Flatiron Building, not on the scale of the one in New York City, but interesting nonetheless. This past week we noticed it was undergoing repairs and scaffolding was up against the side. The back of the building featured a mural called Trompe d'oeil which was created by Canadian artist Derek Besant. I noticed that it had been removed recently, perhaps to facilitate the outside work being done. 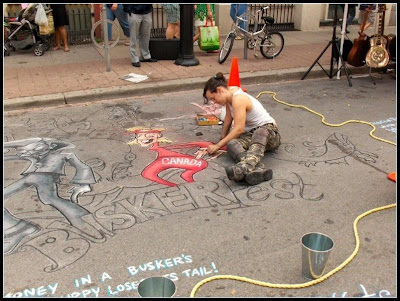 This artist was sitting as low as the CN Tower is high. She was participating in a weekend Busker Festival and was drawing her perception of the city on a canvas of pavement. Her work will be washed away in a few days and her art forgotten. I am sure she will be compelled to draw again on the ground for a few donations.

Let me ask you something, what is not art?
~Author Unknown
Posted by Ruth at 5:54 am