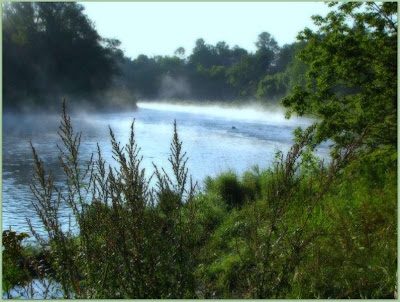 It is hard to believe September is half gone. Most mornings have been cool and some have been to the point of frost in outlying rural areas. The earth is still warm, the dew is heavy, and mist rises from the river early in the day. 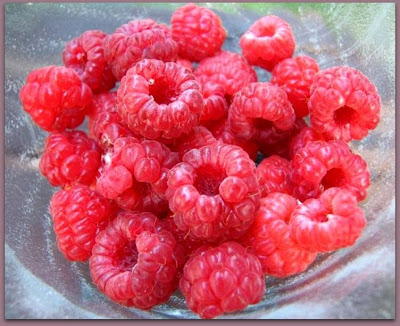 My feet are soaked as I cross the lawn to pick raspberries for breakfast. The fall harvest of this fruit produces the biggest and sweetest berries. 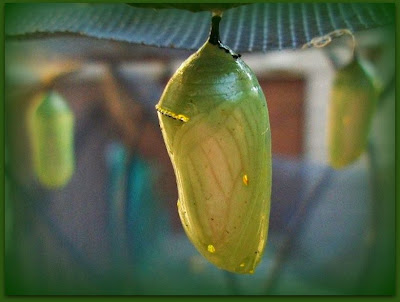 The Monarch butterfly chrysalis is sixteen days old now. Wings are even more visible through the green shell but this group of three is slow to eclose. They need to start on their southern journey before it gets much colder. 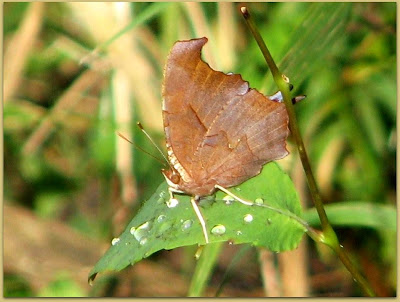 Another butterfly drinks from moisture beads on a leaf. I seldom see an Eastern Comma and this one is reluctant to open its wings. 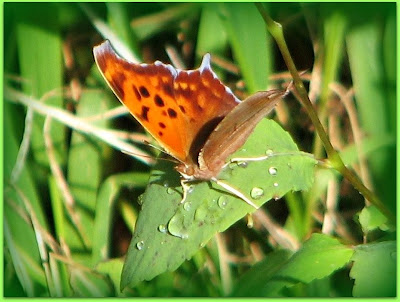 Finally it gives a salute to the morning sun before it flutters away.

Our local newspaper published this story on Monarch butterflies on September 13, 2008. The link is here, but as links quickly go dead, I will copy the text below.

Among the insect group known as lepidoptera is the monarch butterfly that this month embarks on an incredible 5,000-kilometre journey to wintering grounds in Mexico, sometimes flying more than a kilometre above the Earth.

Stage one: Butterflies sip flower nectar but caterpillars only eat milkweed. A female will search for a healthy milkweed plant on which it will lay one egg on one leaf, up to several hundred in an area.

Stage two: Caterpillars emerge from eggs in three to 12 days and undergo five stages of growth known as instars. Caterpillars have a tough exterior called an exoskeleton and as it grows, this exoskeleton splits, sheds and is consumed by the caterpillar. By the time the fifth moulting takes place, a chemical reaction within the caterpillar creates a lovely green skin with gold dots that hardens into a chrysalis.

Stage three: The chrysalis is the pupating stage, where the monarch transforms from caterpillar to butterfly. Attached to the bottom of a milkweed leaf, this stage lasts two weeks with the chrysalis eventually becoming transparent.

Stage four: The monarch emerges as a fully formed butterfly, though it must inflate its wings by pumping fluid which is aided by gravity given the butterfly is hanging upside down under the leaf.

Summer butterfly: The so-called summer butterflies live two to five weeks and do not migrate; rather their purpose is to mate and lay eggs, often several times during a lifespan. As the weather cools and the days shorten, a chemical reaction occurs triggering the last summer generation of caterpillars to emerge as migrating butterflies, with a life span of up to eight months and no interest in breeding.

Mexican holiday: Canada has two populations of monarchs: eastern and western, both with different migratory patterns. The eastern population, anything east of the Rocky Mountains, overwinters in fir trees in a remote area of Mexico, while remaining largely inactive. Researchers studying the population fly overhead, photographing small sections from which they estimate numbers based on density and distribution. Unfortunately, the monarchs' numbers are shrinking, from 20 hectares just a few years ago to last year's estimate of 4.6 hectares, due to diminishing habit, pesticides, herbicides and illegal logging in Mexico.

The milkweed run: Mexico lacks milkweed so in March or early April, monarchs leave for Texas where there is plentiful milkweed for egg laying. Several generations of monarchs will hatch, pupate, emerge then lay eggs as they re-colonize North America. eventually spreading into southern Canada.