Newfie Fries and Other Interesting Foods 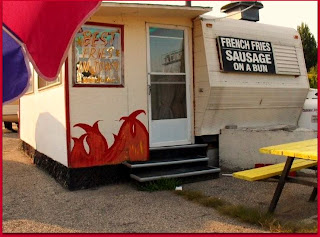 Many Newfoundlanders live in the province of Ontario. They continue to identify with their homeland and are fiercely proud of their heritage no matter how long they have been here. Newfoundland entered into Canada in 1949 as the newest province. Many of its residents are of Irish and Scottish ancestry and the dialect, music and cuisine reflect this connection to some degree. Potatoes and fish are staple foods for sure.

Close to the hospital on an empty lot stands an old "Chip Wagon". It is actually a trailer and the flag of Newfoundland flies proudly above it. One of my patients who had been in hospital for three months following surgery made this the destination of her first trip to the outside world. I drive by the stand every day but have never been inclined to stop for a meal.

The Becka severely limits her intake of sugar, dairy and wheat during ragweed allergy season but had a craving for some french fries one evening. 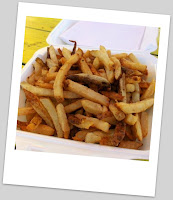 We decided to have some real french fries, not the fake, factory moulded items sold in fast food restaurants. The trailer menu was interesting. Newfie fries came with gravy, peas and stuffing! Poutine, the French Canadian artery clogging delight, came with cheese curds and gravy. And the most trendy option was nacho fries with sour cream and salsa. We settled for a small order of plain fries which ended up being large enough to feed a family of four. But the potatoes were real and they were hot, crisp and delicious. We hid incognito under a large multi-coloured umbrella and enjoyed the treat. 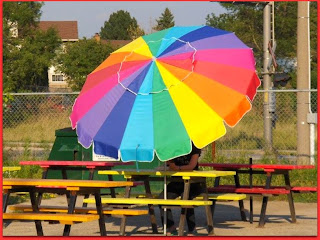 Most cultures have a signature dish and we all enjoy comfort foods that tend to be tasty if not the most healthy for us. Earlier this week, Laura from Somewhere in NJ posted a meme called the Omnivore's Hundred. Many of the foods are ethnic specialities. Here it is with my results. I have added some comments in italics. What are your favourite comfort and ethnic foods??

1) Copy this list into your blog or journal, including these instructions.
2) Bold all the items you’ve eaten.
3) Cross out any items that you would never consider eating.

1. Venison
2. Nettle tea -a patient brought me a big bag of nettles…not bad
3. Huevos rancheros
4. Steak tartare -have you seen Mr Bean hide his steak tartare?
5. Crocodile – well it was Alligator, but only once!
6. Black pudding
7. Cheese fondue- I still have a fondue pot
8. Carp
9. Borscht
10. Baba ghanoush -eggplant is my “iff-iest” vegetable
11. Calamari
12. Pho – one of our favourite Thai take out items
13. PB&J sandwich 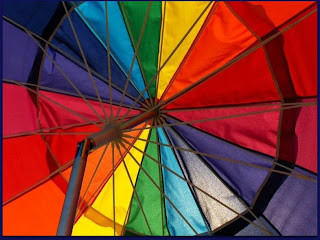 Postscript: My nephew Alex did not think I had enough disgusting food on the list so he has added some of his "favourites". The links are not for the faint of heart or stomach!

None of this stuff is particularly gross, so I’ll add some: