Just for the fun of it ! 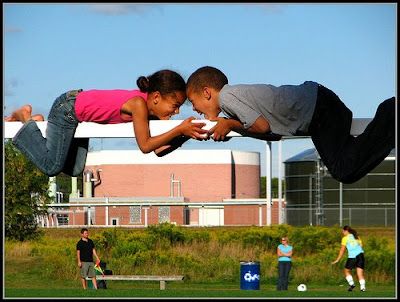 Play keeps us vital and alive.
It gives us an enthusiasm for life that is irreplaceable.
Without it, life just doesn't taste good.

We were at a soccer tournament this weekend for a ladies' league in which our eldest daughter plays. The day was beautiful for sitting in a park and even the dog loved the outing. Several games were going on simultaneously and if one got restless, there was a walking trail along the nearby Thames River.

I took a little walk in the late afternoon and came across a young brother and sister at play. They were gifted with gymnastic ability and scurried up an unused soccer goal post and started to creep along the cross bar until they met head to head. It was great fun watching them carefully inch toward each other in their own game. 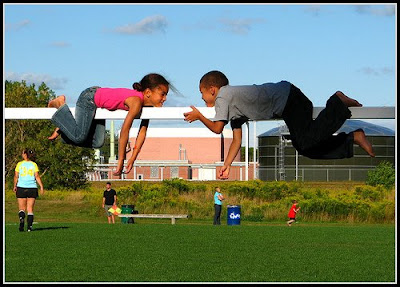 Their mother's team mate was warming up on the crossbar during the soccer match. I can hardly remember the last time I saw children climbing trees or being involved in their own creative play. The Becka visited her favourite childhood playground recently and was unhappy to see that the old climbing poles and the little elevated play house had been removed to make way for safer, plastic slides and swings. I think it is a fear of liability more than a concern for children's safety that has made cities "dumb down" their creative play areas. Children are barely allowed to take risks at all and play time has become very organized for most.

These youngsters made my day, and our daughter's team won their game as well as the pool in their tournament. 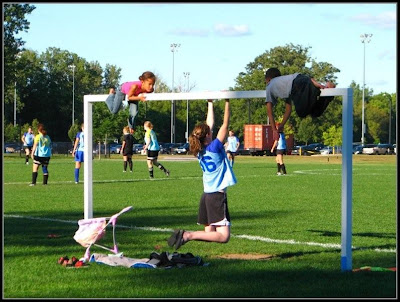